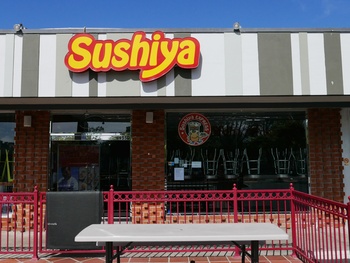 Sushiya Express is a sushi shop at 955 Embarcadero del Mar.

It opened in September 2005: "Sushiya, a Los Angeles-based franchise, opened an I.V. branch on Sept. 30. The new eatery is located at 955 Embarcadero del Mar — previously the site of TJ’s Grill — and is owned by former sushi chef instructor Bruce Lee. Sushiya is I.V.’s third sushi restaurant, but Lee said he is not worried about the competition from CaliRoll Express and Sushi Teri because the four Sushiya restaurants in Los Angeles have always done well." Neither CaliRoll Express nor Sushi Teri are still in business.