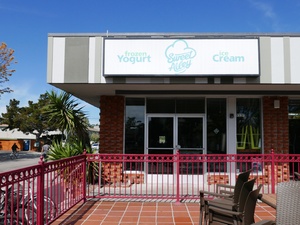 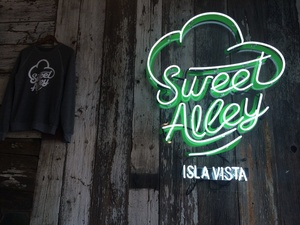 Sweet Alley is a frozen yogurt and candy shop located at 955 Embarcadero del Mar. Common Isla Vista practice for bets is to have the loser owe the winner "one Sweet Alley".

In 2009, the original owner established it in IV, relocated from a downtown location, because "You can attract a lot of walkers and bikers. It’s definitely got the right demographic and will be a good thing for both of us." Here's an interior photo from 2009. They also had a location in Camino Real Marketplace for a few years. The IV location ended up closing in October 2014.

Then in December 2014, Nicholas Mason announced that he had bought the business and was rebranding and renovating it for reopening in January 2015. It's open again now, with new signs and a new interior style.

Here's what this building looked like soon after it opened in 1961. The plants at left seem to be the same spiky plants that are there today. 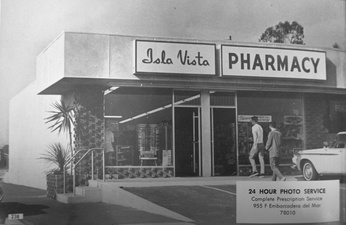