History of Houselessness in Isla Vista

When the University of California, Santa Barbara was officially established in its current location in 1953, the adjacent neighborhood of Isla Vista immediately experienced development and growth as the influx of new students demanded housing and dining accommodations. The houseless population subsequently appeared, since prior to this there was no student community and few resources in the area. Today, the houseless population continues to grow as job opportunities become increasingly limited and rental prices continue to spike. Anyone can be subject to houselessness, whether they be students or long-term residents. Some of the houseless individuals migrated to Isla Vista from other areas, and they have stayed because job prospects are not good for them regardless of location, or because they enjoy the youthful atmosphere, the gorgeous year-round sunny weather, and the scenic views.

According to an article published by The Daily Nexus, the houseless population in Isla Vista has been reduced by over 30% since 2013 due to the construction of The Pescadero Lofts, which provided housing for 35 houseless Isla Vista residents; however, it has increased by 37% since 2016. Despite this increase in houselessness percentage, the total number of houseless individuals has barely changed, and has in fact remained remarkably stable. According to the annual spring report (conducted by the Central Coast Collaborative on Homelessness), the total number of houseless individuals in Isla Vista is approximately 26 people.

In 2010, a documentary called “Houseless” was produced in Isla Vista with the intention of providing direct insight into the lifestyles and culture of the houseless Isla Vista community. The film was screened at the Santa Barbara Hillel in conjunction with Human Rights Week and the Community Affairs Board (CAB). Three years after the premiere of the documentary, many Isla Vista residents felt that their situation had, if anything, worsened, especially in regards to their relationship with the IV police department. 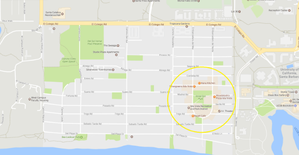 The downtown area (circled in yellow) of Isla Vista is the most common area for the houseless population to hang out and spend their time (photo courtesy of Google Maps).

Houseless is defined as “without a house or houses”, and it is used here in place of “homeless” due to the potential negative connotations associated with that term. Houseless people may have an occupation or an income, but no permanent building in which they reside in, pay rent for, or own. It should also be noted that some houseless people do not feel that they are without a home, even if they lack a permanent physical house. 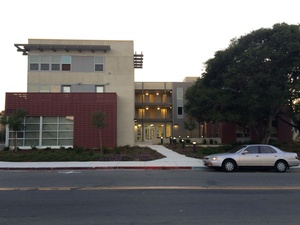 The Pescadero Lofts in Isla Vista, a $10 million dollar building which finished construction in 2014

The Pescadero lofts opened in 2014 with the intention of providing housing for 35 houseless I.V. residents. The facility provides residents with health care services, as well as weekly Alcoholic Anonymous meetings. There is also an on-site computer which residents can use to learn how to create their own online email accounts, bank accounts, and they can use Facebook to reconnect with lost friends and family members. The building is run by staff, volunteers and the support from the Isla Vista community. To facilitate the registration process, the facility uses a “housing-first” model, a method that only requires an identification and birth certificate from prospective residents. The Pescadero Loft is unique because it’s the only the facility in Santa Barbara that uses the “house-first” model, and this allows houseless individuals to receive vital care such as housing first and to receive other necessary health care afterwards.

PATH Santa Barbara belongs to a family of agencies whose main objective is to end houselessness for individuals, families, and communities. The agency’s main priority is to provide housing for the houseless, but they also provide employment assistance, legal services and substance abuse treatment. PATH is a not-for-profit organization that obtains its resources everywhere from donations to volunteer support. Within Santa Barbara country, the agency provides the following programs, which can be utilized by Isla Vista residents: Housing programs, Respite Care Program, Contracted Services, and a Winter Shelter program. In order to be considered as a candidate for the housing programs, an individual must pass a screening test, must be a resident of Santa Barbara, and must remain sober throughout the duration of the program. The housing programs assist houseless people with their job development, recovery and reintegration, as well as their pathway to housing. The Respite Care Program provides services such as hospital referral or other health needs that the person might encounter.

Daily Life of a Houseless Resident

Many of the houseless are not welcome where they lay their heads at night.  Lee, a houseless individual who lives in IV, says that the houseless of Isla Vista are forced to sleep in places where they are less likely to be found by IV Foot Patrol due to the confrontational nature sometimes had with them. He said that many of the houseless individuals he knows have explored their surroundings, and comment that “nature is on their side”.  Since people are not allowed to sleep in public spaces, houseless individuals have to hide during the night or find someone who is willing to let them sleep on their property.  Lee was lucky enough to have found a house that has welcomed him and lets him make use of their property at night.

Many houseless individuals do not seem to be bothered by the elements for majority of the year, thanks to Isla Vista's generally mild climate.  Many have accumulated the appropriate clothing and gear to be comfortable outdoors no matter the season.  Those who are not fortunate enough to own a tent, tarp, or sleeping bag have gathered enough warm clothing to keep themselves warm during the colder times of the year. The Isla Vista Free Box contains different types of articles of clothing that are free for anyone to take, and this is utilized often by houseless individuals.

Houseless residents usually gather in parks and are often found near the downtown area of IV.  Lee and his friend Clyde, who is also a houseless individual, meet in front of IV Market every morning and have coffee together.  After they finish chatting over morning coffee, they go about their day, which usually include checking on some of their houseless friends who might need help due to old age/medical issues. This is one example of the strong sense of community among the Isla Vista houseless population. Lee's friend Clyde is somewhat of a celebrity around IV; he reached internet stardom when he was featured on a Youtube channel called “Whatever”. The same group filmed another video a few weeks later, and gifted Clyde $3,000. 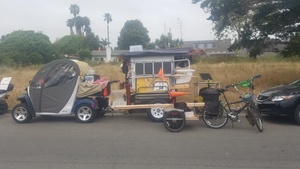 Interestingly, panhandling is somewhat a rare occurrence in IV.  A great deal of the houseless take advantage of the abundant amount of recyclable material discarded by the local college student population. This includes but is not limited to containers that have California Refund Value, all materials that can be salvaged and can still serve a purpose such as papers and linens, and more.  The end of the school year is when salvaging hits its peak in IV.  Every year around this time, the streets and dumpsters of IV are littered with various items which still hold monetary value, discarded by students moving out and disposing of their items that they were not able to sell. One of the most common items discarded and salvaged are bicycles; Clyde has four bicycles himself.  Another potential source of income in Isla Vista comes from providing services. For example, Lee revealed that he sometimes does odd jobs like carpentry and painting. He also collects cans and bottles, which keeps Isla Vista from becoming too littered, and provides him with a few dollars for meals.

Many religious organizations in IV provide various services for houseless residents on a regular basis, which helps reduce starvation rates. St. Michael's University Church provide the houseless with free dinner and a shower every Monday. Unfortunately, the organizations that help to feed the hungry can only do so much for them, as their resources are limited. These resources are designed to help them live a more comfortable life, but they do not provide all of their basic needs; the rest of the resources must be foraged by the residents themselves. The houseless may also make use of discarded foods that they find, which often includes meals discarded by students and overflow from restaurants. Canned and packaged foods which are slightly past their expiration dates are great potential sources of nourishment, which are otherwise discarded by the general public.

Relationship with the greater IV Community

Relationships between Isla Vista residents, both houseless and otherwise, and with IV Foot Patrol, has been improving in recent times, according to Lee. He said that in the past, "we would get spit on and called a bum".  In one incident he was punched while he was sleeping. Lee believes that this change is slowly taking place due to more of the violent houseless individuals being forced out by law enforcement. Many individuals also died of alcohol poisoning. Today, Lee and Clyde feel more a part of the Isla Vista community, and some of the houseless have made friends and established relationships with permanent residents and students. Clyde says that he is blessed to have friends that welcome him into their home and allow him to use some of their appliances.  He also mentioned that receiving that $3,000 dollars was life-changing. 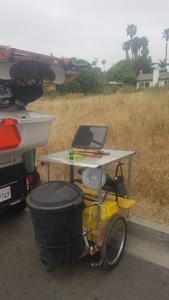 Some of the personal belongings of a houseless person (PC: M. Patricio)

Lee is currently working on connecting solar panels to a battery to power his electric car, and he has experienced fortune in the form of parts or cash donations for his project. One IV resident even donated a solar panel for him to utilize. With access to renewable energy, Lee can provide power to his electric car, which he bought using the small inheritance that he received. He also has a DVD player, a hot plate, and some lights which can be powered by renewable energy, without spending money on gas for a generator. He aims to eventually be able to harness enough energy to be able to share it with his fellow houseless residents. Lee is also quite environmentally-conscious, and we wants to do what he can to minimize waste. According to Lee, “If I can’t help the environment around me, then what good am I”. Lee believes that we should only take what we need to from the planet, and nothing more. He and Clyde both spoke about the importance of cleaning up after themselves, even if their living room is located in the outdoors.

Special thanks to these houseless Isla Vista residents, who consented to be interviewed: