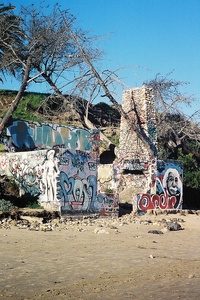 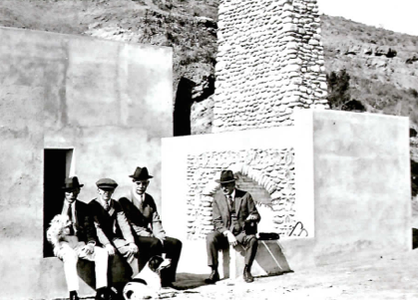 "The jailhouse" and "the jail" are common nicknames for the structure covered in constantly-changing graffiti art on Devereux/Sands Beach between Isla Vista and Coal Oil Point. This building was constructed in the early 1920s as a beach house for the Campbell Ranch, the home of a wealthy family that had decided Coal Oil Point would be a lovely place to live. The jailhouse is an object and subject of art for UCSB students and neighbors, and occasionally the location of parties.

What is it, and why was it built? 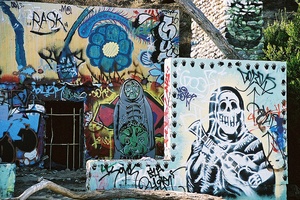 From The Campbell Ranch Research Project:

"The Campbell Ranch in western Goleta Valley once comprised 500 acres which included the entire Coal Oil Point area, today the UCSB's West Campus and Coal Oil Point Reserve, and a separate 250 acre parcel on the south side of Hollister Avenue. Today the winding hand-built entry road to the estate is the main road on UCSB's West Campus. The Campbell family built a large rambling mansion, many outbuildings, guest cottages, a bunkhouse, an abalone shell-encrusted beach house and a large barn for the family horses in the 1920's. The ranch with its British flavor was a social center for early Santa Barbara residents and supported many local people and their families."

"The stone and cement beach house survives below the cliffs east of Coal Oil Point. The derelict structure has weathered numerous El Nino events in recent decades. It is now covered in graffiti rather than abalone shells and the cypress trees that once surrounded it have fallen. Local lore says the beach house was used as a landing and storage place for illegal spirits during Prohibition and that tunnels for hiding smuggled goods once extended well under the bluff."

The front open area of the house was a barbecue/fireplace area according to "The Story of the Campbells: From Montecito to Goleta and Back" by Anita Guerrini in Montecito Magazine Spring-Summer 2010, which has more context on the family and what they did at Coal Oil Point.

For more about the ranch buildings, see the Old Campbell Barn and Devereux Campus. There are many photos of the remaining Campbell Ranch structures in this article on Edhat from 2012. 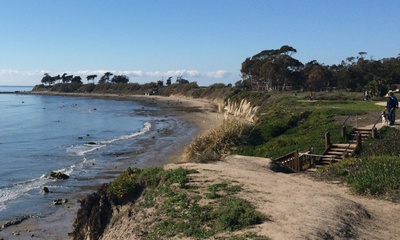 If you go to the west end of Del Playa, walk to the bluff, and look toward Coal Oil Point, the jailhouse is visible on the beach at a little more than the halfway point. In this photo you can also see some pampas grass (the fluffy pale plant), which has its own interesting story. January 2015, by Britta Gustafson (CC BY-SA)

It's been photographed and graffitied a thousand times; it's everybody's shared landmark. The photographers silently encourage the painters, and the painters silently encourage the photographers. You have to pile up other people's shared photos to start getting a sense of it: the jail is a single point shared by many people over many years. Each piece of art is only temporarily visible, and most people only spend a few years in the area. It's all temporary and layered and a pretty spot to walk to.

From "A to Z Treasure Map of Art to Find at UCSB": "Beer cans, glass and spray paint line the corners, but this garbage is almost beautiful. If you feel like exploring the ghosts of I.V.’s past, check out The Jailhouse and see the colorful remains of many a good time shared amongst friends. It’s a haven for bonding and inspiration, an elephant graveyard of many intoxicatingly happy nights on the beach."

A gallery of photos ranging from 2003 to 2010. Cross section of a chunk of the wall, showing the layers of paint.

Do you have more photos of it? Feel free to upload them here - the graffiti is always changing.