The Loop was the first of the large new luxury student apartment buildings in IV in the 2010s. It was built in coordination with the Santa Barbara County Redevelopment Agency to fit with the goals of the IV Master Plan (page 64 of 2009-2010 report). It is adjacent to the Icon; the two apartment complexes can look like they are one large building together. Both are mixed-use buildings with commercial retail space on the ground floor; the Loop has Pizza My Heart and Crushcakes.

It is named after the nickname for the U-shaped road formation made by the two Embarcaderos, "the loop". The loop is also the name of the drinking activity where a group of people drinks a pitcher of beer at several beer-serving restaurants/bars around the the loop.

Do you know something about this? You can click "edit" and fill this part out!

Before the Loop and the Icon

Before the Loop and the Icon were built, the bottom of the Embarcadero loop had an auto/bike shop that used to be a gas station, a small restaurant building (Super Cucas) that was the location of the first restaurant in IV (Nebi's Coffee Shop), and a small storefront that was a supplement shop for a while (from about 2002 to 2011). The auto/bike shop may have also been one of the oldest commercial buildings in IV: "Profile of Downtown Isla Vista" by Michel Nellis (1990) says "Also in 1960, Velma Morrow and Ada Bowers, who owned the property next to Nebi's leased their vacant land to Standard Oil where R. D. Stewart built the first gas station, only two doors from where he lived. His was the first of four stations to come to Isla Vista" (page 6).

There's a video of Super Cucas being demolished in October 2011 and a blog post about some of the destruction and construction. 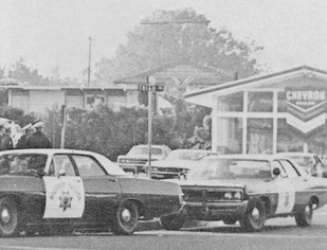 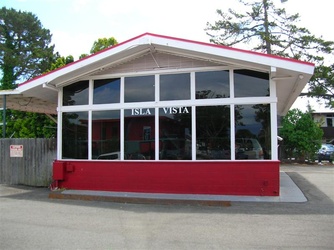 April 2005, by Dos (twoinstincts) (CC BY-NC-SA). "This place was doing tinting, used car sales, and body bork for a while, but the signs are gone. Not sure what's going on now." 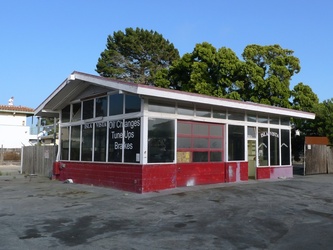 June 2011, by Britta Gustafson (CC BY-SA). This had been an outdoor bicycle sales place before closing. 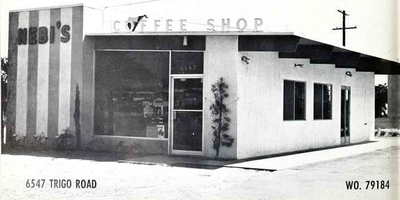 Nebi's Coffee Shop, which opened in 1959, from 1960 UCSB yearbook, page 250. The building got some renovations and additions later, but the raised sign area at left and right-side windows, door, and roof beams can be seen in the Super Cucas photos. 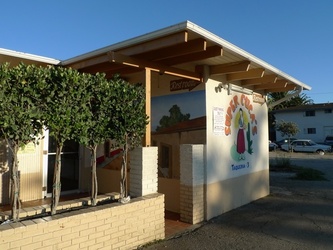 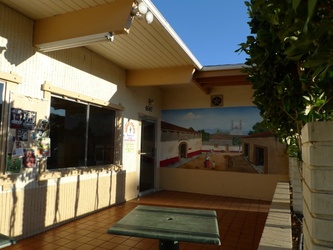 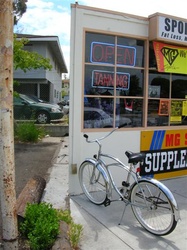 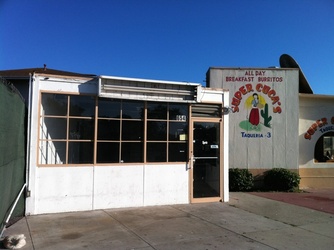 Empty shop in July 2011, by Britta Gustafson (CC BY-SA). The green fence at left marks the division between the Loop lot on the left (built first) and the Icon lot. 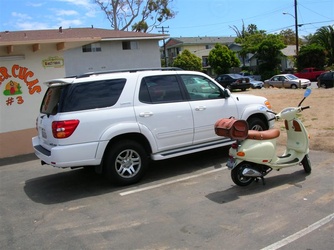 Construction and promotion of the Loop

The Loop distributed stickers and put up signs with images of the albino raccoon, snowy plovers, Pirate, and other local icons. This included a sticker with a symbol of a couch fire, which was controversial because couch burnings are not a good part of IV, unlike albino raccoons and snowy plovers. 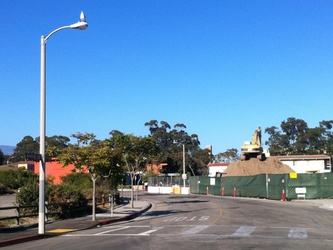 July 2011, by Britta Gustafson (CC BY-SA). Early work, with a seagull on a lamp post and a digger on a dirt pile. 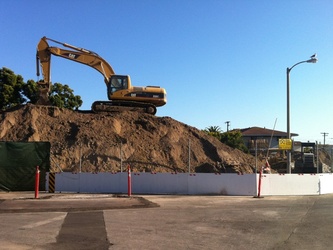 July 2011, by Britta Gustafson (CC BY-SA). Different view of the digger on a dirt pile, with another seagull on a lamp post. 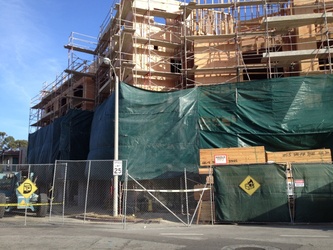 March 2012, by Britta Gustafson (CC BY-SA). Construction with promotional signs, Pirate on the left and couch fire on the right. 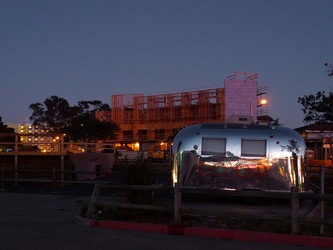 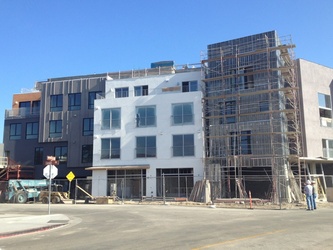 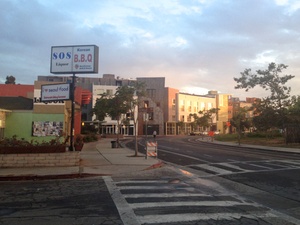 Nebi's Coffee Shop and the old gas station were simple buildings, but they had a little bit of mid-century Southern California style: big windows in front, geometric shapes, a nod to southwestern-style exterior beams, a peaked roof with windows close to the roofline. There are a lot of grander examples of this style that the original builders were probably drawing from, such as Eichler homes, but the new building doesn't use anything from that tradition.