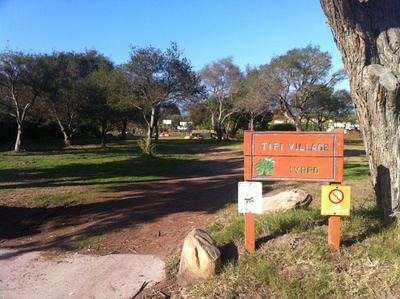 Tipi Village was a community in a formerly empty lot on Sueno Road in the mid-70s, and it is now the name of an IVRPD park in that location, adjacent to Estero Park and across the street from the Sueno Orchard. The UCSB/IV Walking Tour describes the former residents as "back-to-nature hippies."

History of the village 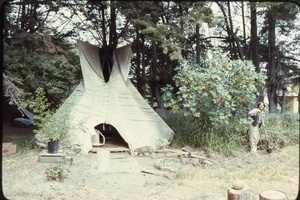 By Peter MeissnerAccording to Isla Vista: A Citizen's History by Carmen Lodise (page 86), some people had been living in tipis in IV since the 60s, with about 25 tipis in 1972 around IV's backyards and vacant lots - if somebody complained, you could pick up your tipi and move to a new spot. Their numbers grew in the late 70s, with more than sixty tipis around IV, including 21 in Tipi Village. The book says "Most people attribute this dramatic increase in the number of tipi dwellers to the huge rent increases that began in 1975, which is when enrollment at UCSB began to skyrocket" - rising from under 12,500 students in 1972 to over 16,000 by 1982.

The Daily Nexus in 2007 helps explain what happened next: 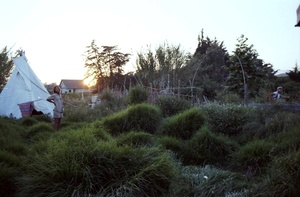 Village South by Peter Meissner"During the mid-1970s, a few dozen residents decided to relocate to the 6700 block of Sueno Road on an empty lot dubbed, “Tipi Village.” Here, residents set up tents and tipis, and ate vegetables from nearby community gardens.

However, some community members began to complain about the waste produced by these villagers in the late 1970s. A couple thousand petitioners attempted to save the village, and they did, albeit temporarily. The movement caused a considerable commotion in I.V. and Goleta and even led to campaigns asking for the recall of local officials. Yet, in October 1979, following a plea and report from families associated with the Evangelical Orthodox Church, located in I.V., the county ordered an eviction of all Tipi Village residents, citing a number of sanitation problems. Today, a sign commemorating the village sits in its place on Sueno Road." 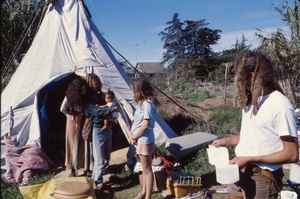 By Peter MeissnerThere is a more detailed history in 'More Than Just Parks': The Isla Vista Recreation & Park District, 1972-1998, starting with this:

"The Tipi Village fight encompassed many of the political issues of the 1970s: the rights of the community vs. those of a small minority; the nature of alternative living in Isla Vista, and the role of the IVRPD in the community.

Tipi (sometimes spelled Teepee or Tepee) Village was a small commune located on the 6700 block of Sueno, and was a product of the 1960s counter culture in Isla Vista. The first tipi in Isla Vista appeared on a vacant lot on 6730 Sueno in 1971. By 1978 between a dozen and 15 people lived in collection of tipis, wickiups and wooden shacks on the 6700 block of Estero, growing their food in organic gardens, recycling what little waste they produced, and using the bathrooms in the Pink House across the street.

They organized themselves into a council to control membership of the commune, and called themselves a experiment on "non-consumptive alternative lifestyle." They paid the owner, a Long Beach convalescent hospital resident named Mrs. Defenbaugh, $60 a month to cover the property taxes on the land."

The paper goes on to describe the political challenges and issues. 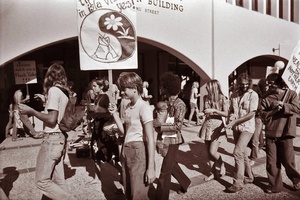 From a rally to save the village, by Peter MeissnerA summary of these challenges based on pages 87-89 of Isla Vista: A Citizen's History: in 1979, the Isla Vista Sanitary District (later renamed the Goleta West Sanitary District) asked the sheriff to evict Tipi Village due to sanitation concerns (although residents were allowed to use nearby IVRPD office bathrooms). A couple weeks before that, the IVRPD had purchased the property, so the IVRPD responded by submitting "a plan to the County to establish an official camp ground at the Tipi Village site using chemical toilets." The Sanitary District board ignored these plans, and since most of IV supported the existence of the village, IV residents collected thousands of signatures on a petition asking for that board to be recalled. Then, the organizers of the recall campaign decided to call off the campaign in exchange for asking the board to delay the eviction for a few months so the campground effort could have a chance to get approved. But the county board of supervisors voted down the campground rezoning, after the St. Athanasius Evangelical Orthodox Church and a few others opposed the effort. The people of Tipi Village peacefully moved out.

More photos: people hanging out in a structure, people in a tipi. 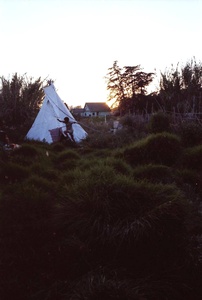 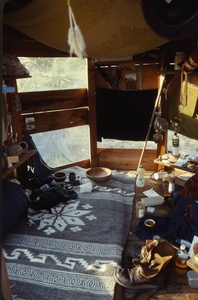 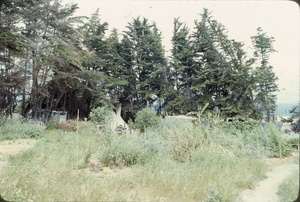 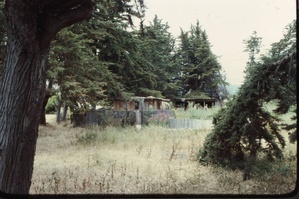 Photos of a rally to save Tipi Village

From this set of photos. 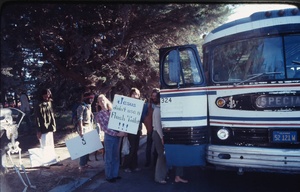 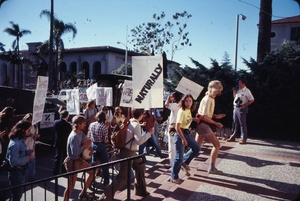 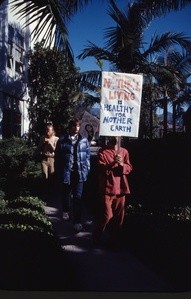 Later disputes about camping in the parks

The story of Tipi Village came up in early 2002, when IV homeless people "stationed themselves in tents in Anisq'Oyo' Park in protest of a lack of living space" and the IVRPD realized that they didn't have a no-camping ordinance for the parks, which meant that the Foot Patrol had been unlawfully ticketing people for camping for ten years. There was public debate about whether there should be an ordinance about this, with some opinions saying that Tipi Village had been a good idea and should be brought back, and other other opinions saying that Tipi Village had been a "mess". An IVRPD director said a formal homeless campground "would cost between a half and three-quarters of a million dollars, and it’s not solution orientated."

In 2007 the Nexus reported that the ordinance was unevenly enforced, with debate about whether it should be enforced.