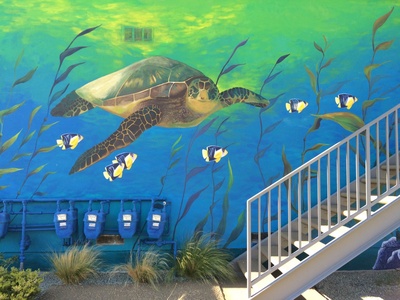 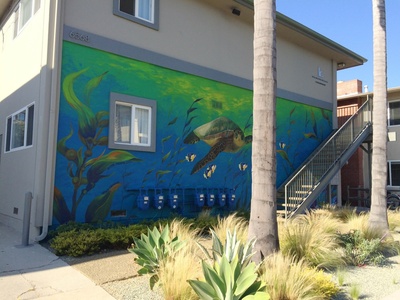 July 2015, by Britta Gustafson (CC BY-SA)As a student attending UCSB, Isla Vista (IV) has always been an obscure place to me. It was not until I lived in IV during my third year of undergrad that I really immersed myself into the community here. I find myself boarding throughout IV from my house to my friend’s house on a daily basis and I came to realize the artistic impression left on this community. There are a number of murals and paintings throughout each street that represent a different aspect of identity and community.

The one piece I wanted to touch upon is the turtle mural on Sabado Tarde. This was painted by a current UCSB student. Fourth-year Kimberly (Kim) Anne Pecache painted the mural last year. I was able to personally interview Kim and she gave me more information about it: “Ate Caylene and I think 65 Sabado is haunted now. We started the turtle mural there because that's where a drunk driver ran over students several years ago. There's a plaque with the names of the victims on that apartment. When we were painting the mural, the shooting happened. That's when we added the 6 fish.”

This piece may serve as a backdrop for a lot of people’s Instagram posts or a sign of trivia towards Isla Vista residents, but to Kim and so many other students, this mural holds a lot of history and culture behind it and only serves as one of many examples throughout Isla Vista.

Articles about the mural