UC Santa Barbara is infamous for being surrounded by beautiful beaches. Nearly every propaganda piece, postcard, and google search of the school showcases Campus Point from an aerial shot. However as many residents of the community know, there are many beaches to go to besides Campus Point. The best spot depends on what activity you want to do and how far you are willing to walk or bike. Some areas of the beach are seen as undesirable, or not even considered to be a beach, while others are perfect for this one activity. So from Goleta to Sands Beach, where is the spot to go to? 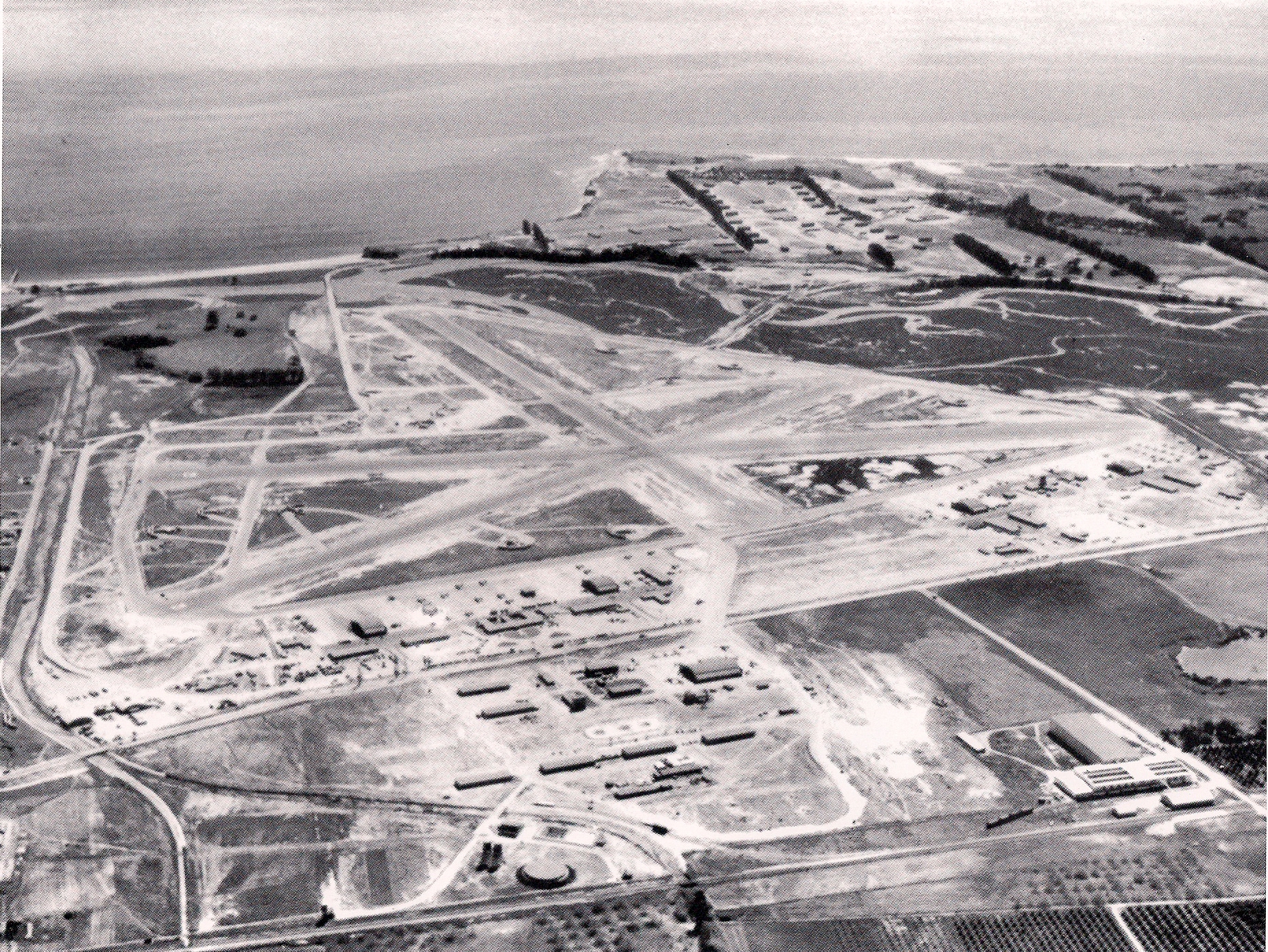 Before UCSB became established in 1944, the area used to be an agricultural site in the 1920’s and then later a marine corps air station that was used during World War II. Both of these caused a good amount of environmental disturbance since the topsoil became depleted which left the bare mineral subsoil exposed. This made it easier for nonnative plant species to invade which hurt the native species’ ability to thrive. Luckily, some wetlands and native plants were able to survive which became the motivation behind the Campus Point restoration.

In 1969, an oil spill off the California coast spilled more than three million gallons of crude along the Santa Barbara beaches. The spill lead to a national wave of environmental legislation to protect and preserve the coast and marine life. Soon after in 1970, the environmental program at UCSB began. However, offshore drilling was not banned. Companies are still drilling for oil today, putting economic value over health hazards.

Beach erosion has also been an ongoing problem facing this area. The Goleta Beach Nourishment Project talks about the effort of the city to prevent further erosion by using sand nourishment equipment. Storms during the early 2000s took a heavy toll on the face of the beach wearing in down the coast line. This required emergency permitted rock revetment placements to prevent anymore erosion. The rocks were placed all along the beach to protect the integrity of the beach. Because of this system in place people are still able to enjoy the wonderful attractions Goleta beach has to offer.  The project started in 2003 but the area is still trying to combat the issue. See the article on The Beach to learn more.

Before crossing Henley Gate, the official entrance of the UCSB campus, there is a beautiful strip of tall palm trees and vast ocean to the west. This is Goleta beach which was founded in 1949. It has a welcoming view of the stunning coastal line that the UCSB community has to offer. The coastal terrain surrounding UCSB varies from being rocky to sandy. Beaches do not have barriers that physically distinguish the span of the beach. Instead these boundaries are created socially. When looking at the beach most people tend to set up all across the length parallel to the parking lot. Many beach goers agreed that the beach starts where the rock meets a bend in the coast line towards the end of the parking lot and ends a little past the pier. Although the beach boundary is cut off before Hanley Gate, Goleta Beach is still a part of the UCSB community.

Through observations and interviews, Goleta beach is home to both visitors and Goleta and IV community members. This beach brings an array of individuals together since there is something for everyone to do. Some of the features are: soft sand, little debris, horseshoes, picnic/ barbecue areas, play structures, and fishing. Families were especially drawn to this beach because the life guard tower provided them comfort that their children can enter the water safely. One community member also said, “The waves are a little gentler hear and the sand does not have too many trash rock or broken shells which makes walk painless”.

Although Goleta beach is beloved by many, the one common concern is the boulders that create a drop off before you can get to the sand. Many describe how “its hard to get myself and my small children down to the sand because of the rocks, I just don’t want them to slip and fall”. Others create alternate routes to avoid this inconvenience. Interestingly enough, the rocks are actually an ecological conservation strategy which is part of the Goleta Beach Nourishment Project that was mentioned earlier. 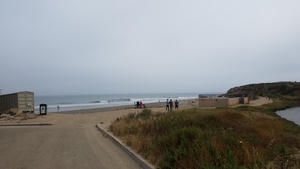 Campus Point is probably the most notable beach associated with UCSB. For this reason many families, visitors, and students tend to find their way here. For students living on campus, this is best surf spot around. There is a rental center hosted by the UCSB Department of Recreation that allows people to rent out surfboards, kayaks, and stand up paddle boards. 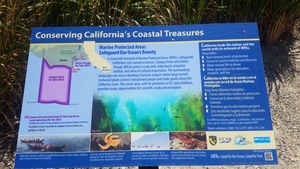 MPA Sign Outside The Reef May 2017 by Ashley Brunier

Right next to the rental facility lies The Reef, which is a small aquarium run by students and volunteers. Those who want to touch some marine animals and learn more about the local marine ecosystem should visit on Saturdays between 11 and 2pm. What many people do not know is that Campus Point is the beginning of a marine protected area, or an MPA which happens to be a no take zone. It is up to the fishermen and visitors to know where this area is because it is unlawful for any living, geological, or cultural marine resource to be injured or taken. This might deter some people from going here if you are looking to catch a nice fish dinner. The US Fish and Wildlife Service mandates this law in accordance with the California Marine Life Protection Act of 1999. Our MPA, called the Campus Point State Marine Conservation Area, extends all the way until Ellwood Beach.

Past Campus Point is the Peninsula which is usually full of joggers and people walking. For those simply looking for the best scenery, this is the place to go. Along the bluffs you can see the ocean for miles and there is a direct view of the Channel Islands. Many like to admire the restoration work that is currently underway. According to the restoration staff, the invasive ice plant is being replaced by native plants like the California poppy and the Beach Morning-Glory to create a beautiful, natural look. On the lagoon island many visitors say it essential to see the labyrinth since it is another famous landmark associated with UCSB. Beneath the peninsula bluffs is Dunes beach which is a good spot to tan since this is a clean, sandy area.

Once you get past Manzanita dorms, not too many people are seen because there is too many rocks, kelp, and and tar. When residents were asked, many said they do not consider this section to be a beach because it is not useful. However when asked to someone with a more ecological background, like the Santa Barbara Channelkeeper, a beach is anywhere where the water meets the land. One student mentioned that she considers a beach to be anywhere that is accessible, for example, having stairs. There are five stairways along Del Playa Drive that lead out to the IV beach. The stairway near the end of DP, at Camino Majorca, seems to be the best access point since that is where the kelp and rocks finally start to thin and allow people to enjoy the beach more.

For those who live in Isla Vista, Coal Oil Point is another great surf spot to go to. There is also tide pool rich with life that many people like to observe. 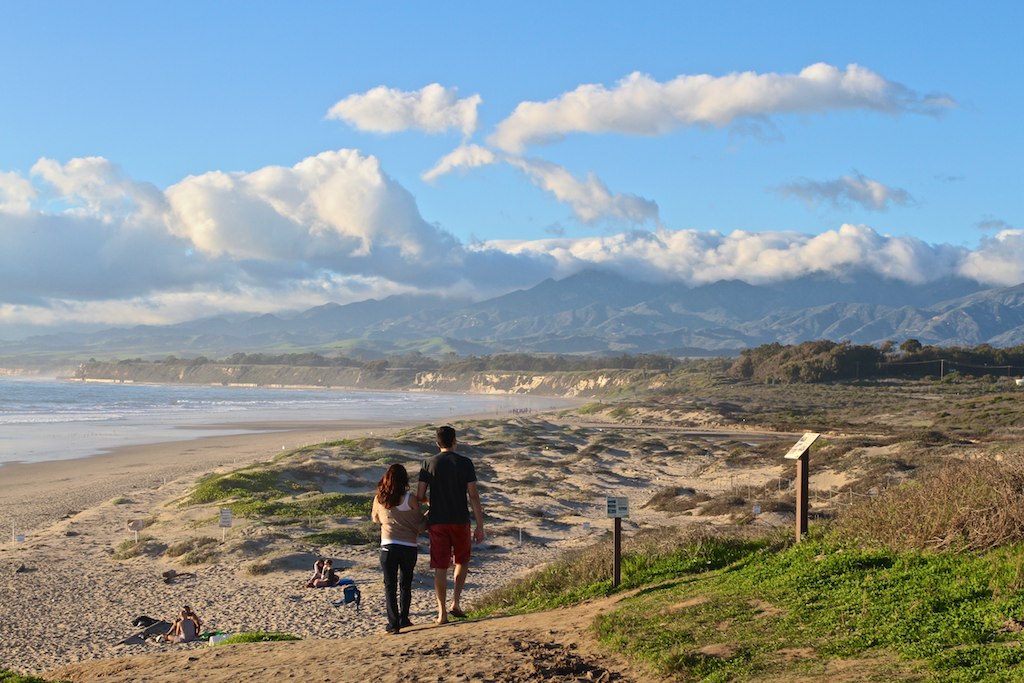 Sands beach is located on the west side of Coal Oil point in Isla Vista, California. This beach attracts surfers, joggers, walkers, and any person trying to enjoy some peace and quiet. It is known for being one of the best spots to watch the sunset while sitting on the cliffs with friends, or for just reading a book and enjoying the beautiful surrounding trees and plants. The waves are amazing for surfing and the trail leads joggers to a beautiful view of the ocean.

Through observations and interviews, this beach does not attract many families or tourists due to there being no picnic areas, barbeque pits, and playgrounds for children. Instead this beach more so attracts the locals of Isla Vista/Goleta and Santa Barbara. Interestingly enough, when asked about the boundaries of Sands beach, many had the same answer which was that Sands starts by the stairs at the end of DP and finishes at the pier. On the map however, Sands Beach is said to begin at the western side of Coal Oil Point which can cause a bit of a confusion. This probably has to do with the fact that residents of Isla Vista mostly get to Sands beach by using the stairway at the end of DP.

According to some visitors of the beach, they really enjoy Sands because of the peaceful vibe it brings. “Sands beach is therapeutic,” says Jose, a third year UCSB student who has been coming to this beach for 3 years to just sit and enjoy the sunset. Most people regret not taking advantage of this beach, and enjoying it to its full potential. Many love the fact that Sands beach has local surfers, and regular joggers. They like that it is close to their homes and that it has a quiet and peaceful ambiance.

Although people thought this beach was great overall, some did mention that having more tables or sitting areas like benches would be nice. If they want to have a barbeque, they would have to go all the way to Goleta beach, by the entrance of UCSB. Moreover, a few others said that drinking wasn't allowed on this beach, which was disappointing because it’s so relaxing and they would want to enjoy a cold beer while watching the sunset. However, that doesn’t stop people from doing it anyways. So people grab your chairs and blankets, and enjoy the peaceful and beautiful sunset on Sands Beach. You won’t regret it!