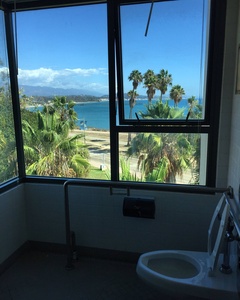 Did you know that there is a secret bathroom at UCSB? Well there is, and it’s fucking awesome. But before you get too excited, you need to know that we are not about to disclose the location of the bathroom because (obviously) it’s a secret and the “inside” students and faculty intend to keep it that way.

The breathtaking outlook from the bathroom windows truly provide a unique and intimate experience if you’re looking for a loo with a view. Set high above the coast of Santa Barbara is where you’ll find the alleged “Poseidon’s throne” overlooking palm trees and the beautiful Pacific Ocean. Ever since the bathroom's inception, it has been a one person men's restroom with a single lock. However, that did not stop women from entering and using the bathroom to the fullest extent because something as exclusive as this should not be limited to one gender. In fact, this past year, UCSB has made the bathroom gender neutral so anyone can use it.

The crux of this article is to inspire all those inquisitive students out there who have the desire to find this secret bathroom and satisfy their own curiosity. I can personally tell you that this is hands down the best bathroom I have ever used at school and your efforts to find the bathroom will be greatly rewarded. All we ask is that if you do find it, please have respect for the surrounding faculty and other “insiders” and keep it a secret. Our interviews with many of the students and staff who use the bathroom regularly all stem off of the same principle: secrecy. Even still, we encourage students to look for this bathroom because it is your privilege here at UCSB. Happy hunting.

For more than a decade, the UCSB secret bathroom had been a single occupancy men’s restroom.  Sadly, the women’s room right next door to it featured a solid wall in lieu of the panoramic windows the men’s room enjoyed.  This didn’t stop all women from taking advantage of the fabulous view, since it has always been single occupancy, but it certainly deterred many, especially temporary guests of UCSB.  In 2014 the UC system at large made a push for gender neutral restrooms at all 10 of its campuses, UCSB included.  Unfortunately, the UCSB secret bathroom was not one of the restrooms originally assigned a gender neutral status, despite the obvious inequity of the gendered restrooms at this particular location.  The tides turned in 2016 when a cohort of graduate students began a deliberately quiet campaign to have the secret bathroom turned into a gender neutral facility.  The cohort recognized the publicity issues faced by the restroom and kept the campaign limited to the building management and faculty at its home.  The graduate students found success later that same year, the UCSB secret bathroom and its neighboring women’s restrooms are now both gender neutral.  Other restrooms in the building are a mix of gendered and gender neutral, but this didn’t sour their victory in claiming an equal stake in the secret bathroom.  (Graduate Student On-Site Interviews)

In an interview with the Building Manager, we learned about the turbulent discourse surrounding the secret bathrooms.  Often, the bathroom was sought out and used for extended periods of time by students and other faculty who had no other business in the building except to use the secret bathroom.  This created only a minor inconvenience to those who work in the building, but the number of complaints were significant.  More aggravating to our interviewee was that offices in close proximity to the restroom heard students using the bathroom for “illicit purposes” (we will let your imagination decide what that means).  The building manager clearly had to do something about it, so he could focus on taking care of the more serious issues his job normally entails in other buildings without such hidden treasure.  As it turned out, tour guides had been telling prospective students about the bathroom more than anything as a quick fun-fact about UCSB’s campus.  This issue was formally addressed between the building manager and tour guides, but unfortunately it didn’t end there.  The ‘outsiders’ who had been explicitly told the location kept coming.  Eventually, the building manager decided to run a little stakeout.  Hiding strategically in plain sight--confident it was unlikely anyone would recognize him as the building manager--and heard a tour guide say in a whisper, “I’m not supposed to talk about it but this is so cool! …”  After another, more pointed discussion with tour guide administration, the publicity surrounding the secret bathroom has declined significantly.  (Interview With the Building Manager and Staff)

Fortunately for us (and you, the reader) the building manager was comfortable sharing his experiences, on the condition we’d agreed to uphold regardless of his request; that we do not disclose the location outright.

With all of this information and rumors surrounding the secret bathroom here at UCSB, one thing’s for sure: too many people know about it. Recent Buzzfeed articles divulging the location have been shared all over Facebook, ruining the secrecy of the bathroom and diminishing the exclusivity. These pop culture articles about the bathroom really go against the spirit of this hidden gem. We ask you not to share these articles on social media out of respect for the students and faculty that really intend to keep their privacy. After all, the coolest thing to do would be to keep a secret. Thank you.