The ocean takes about 71% area of the planet about one quarter of the known species (about 8.7 millions) are marine lives. It is the blood of the earth. Therefore, it is the most important ecosystem to our planet’s biodiversity. Most of the water we drink, the air we breathe, and lives we see, are from the ocean. It also absorbs carbon dioxide, which helps relieve the stress that our industrialized society brings to the earth. Humans, and many other species, cannot live without the ocean. The ocean is very sensitive to climate change. Overfishing, oil spill, whale hunting, etc, all these human activities have caused big trouble to the oceanic ecosystem.

Our community, Isla Vista, is right by the Pacific Ocean. Thus, changes of the ocean will directly influence our daily lives. It is important to learn about what is going on both in our human society, and in the nature world. 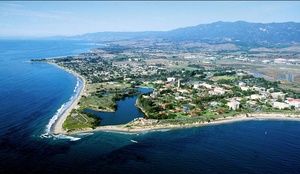 The ocean is the only home to whales. The whale travels all the way to north and back to south every year. It is believed that its migration route is the longest among all the known mammals’s. Usually, whales travel to cold water for feeding and warmer waters to give birth (whaleroute.com). Therefore, what has changed in the ocean is directly reflective from whales’ living patterns. See (https://oceantoday.noaa.gov/graywhalemigration/) for a video on gray whale migration. 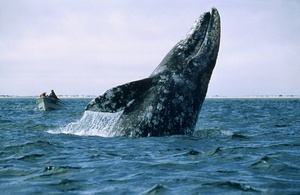 We have to pay more attention to the whale because they are living right by us in the Pacific Ocean. One of the members in the whale family that passes Santa Barbara during migration every year is the gray whale. This year, it is said that this season’s migration started more slowly and ended earlier than the past few years for both scientific sites that report to Journey North (learner.org). The changes in the marine world have definitely influenced the migration pattern of the whales in the Pacific Ocean. If we let the situation continue, the biodiversity of our planet might be additionally decreasing to an unprecedented number. We cannot just let it happen.  We do care about the biodiversity because every species, including humans, is an important portion of the planet. No one survives if others become extinct. We humans are threatened by climate change, as well. 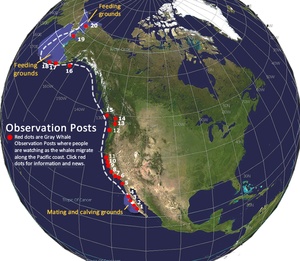 3. History of the Chumash's whaling activities

The Chumash have a history of interacting with whales, both in the symbiotic way, and in the more detrimental sense.  Historically, they’ve been used a food and tool source. The Chumash would not normally hunt whales, but instead wait for them to be washed ashore. Usually this meant a celebration and a feast. Pieces of whale bones were used for splitting wood, which would later be carved. Whalebones were also used as wedges and scrapers. Occasionally, when they were hunted, the Chumash used large canoes called tomols that measured up to 30 feet. Whale bones were also used for house support. On the mainland, archaeological evidence of whale bones have large diameter perforation and worn grooves at either end, and have been identified as shaft- straighteners or throwing sticks (Fagan 1995). 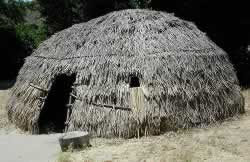 Moreover symbolically, the Chumash believed that whales were driven ashore by swordfish. Because of this, and the importance of whales as a food source, swordfish are culturally revered. One myth within Chumash tradition is that swordfish throw whales around like a ball. When swordfish throw them onto land, they wash ashore. Because of the association between plentiful meat, whales, and swordfish, swordfish have become so revered as to have a ceremonial swordfish dancer, whose ritual was supposed to bring a whale meat bounty. They also consider swordfish to people the ocean counterparts of humans (Blackthorn 1975).

In non-Native American populations, whaling has been an impactful presence in the Goleta/Santa Barbara area. Looking towards the bluffs of UCSB from Goleta beach, you can find the whaling station that was active from about 1870-1890 and was the primary headquarters of whale-hunting in the area for the sake of oil for lamps and heating. The outer layer was the only part of the whale desired for oil, so fisherman—drawn to the whaling lifestyle by the allure of living on the beach with their family and having an income every migration season—would leave the carcasses on the beach to rot while they burned the fat to get oil. Hunting whales, however, was extremely dangerous: the whales would aggressively fight back and cause many fishermen to lose their lives, not to mention the danger of the bomb harpoons used to hunt them--which wracked up their own casualties. Fishermen who were a part of the Goleta Company would live in shacks off the west end of Goleta beach, but once the whales became harder to hunt because of skittishness and overall overhunting, these shanties and the whaling industry itself was abandoned (goletahistory.com). 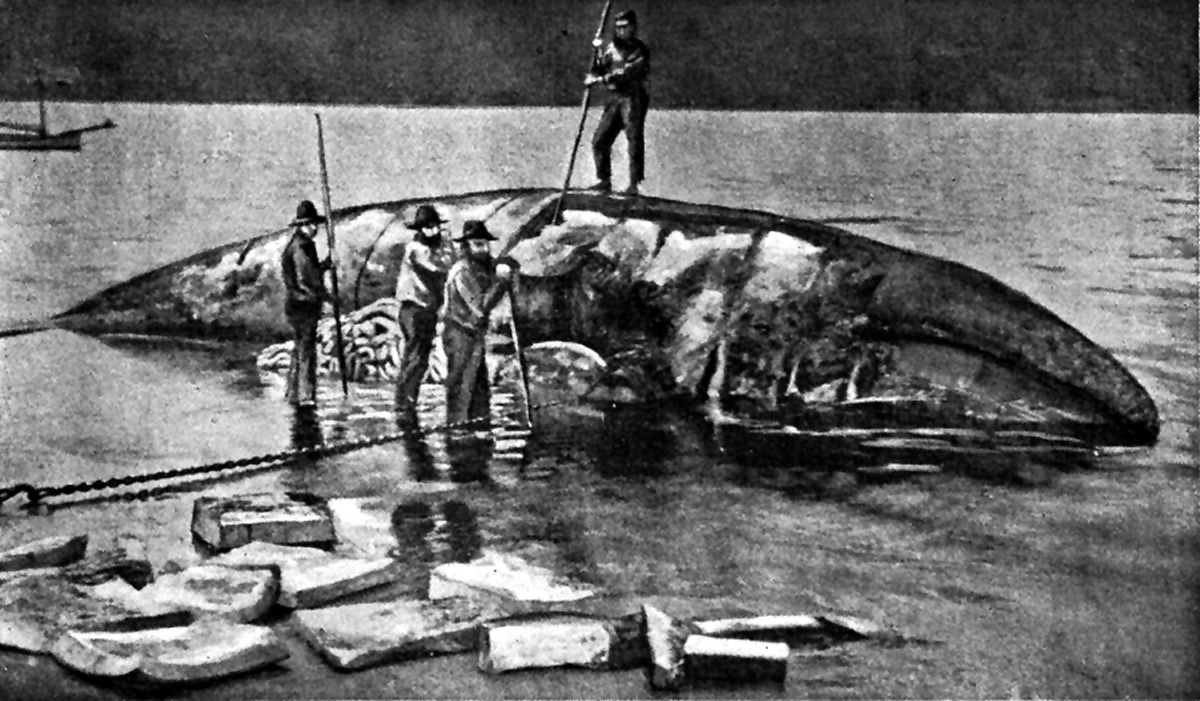 The geographical placement of the Chumash Indians had certain ecological pressures that forced these indigenous people to utilize and take advantage of the environment. Marine fauna, and material culture to sustain this mode of living is apparent in the material culture. Marine species such as fish or sea mammals, and other fauna were either directly utilized as food of for other cultural/material uses that would help them with their endeavours. Harpoons, fish hooks, plank canoes, and fishnets are some of the tools that they would utilize to catch these animals (Heizer & Elsasser 1981). Considering their placement in the context of California, the Chumash are considered to be coastal sea hunters and fishers; this meant that they were using what the environment had to offer, considering all variables of survival (diet, settlements, cultural significance to a particular livelihood). Material culture that would enable them to achieve the highest gross in terms of hunting was always considered. But, just like anything, society’s industrial aspirations continue to evolve. Better technology to hunt only means that the quantity of fish will increase. This is vital when understanding the contemporary issue of whaling and its effects on their behavior, diet, settlement patterns, migration, and overall survival. In order to have an accurate understanding of the present issue of whales in relation to their environment, one must use historical archives/data to see how whaling manifested into a larger industry; an activity in which monetary/capitalistic values were incentives to use whales and the respected environment for their monetary value. In the 1920’s, whaling and the whaling industry became a profitable activity, resulting in mass amounts of boats heading off to sea. Things like lard, tooth brush handles, brushes, clothing corsets, soil fertilizers, whale oil, and other uses were carried around the early 1900’s (Hogg 1921). Whales were being killed far more than the present day, as it was recorded that along the coast, 3-4 whales were killed a day by companies such as the California Sea Products. (Hogg 1921). These 3-4 whales was only a portion of the estimated 30,000 whales killed that year.  In 1982, commercial whaling was banned by the International Whaling Commission's moratorium as they had realized the inevitable need to protect these ecosystems. Despite, these initiatives, countries like Japan, Iceland, and Norway continue to kill off these whales. Through the disguise of “scientific whaling”, countries such as these continue killing hundreds of whales, despite the ban on commercial whaling (wwf.panda.org). 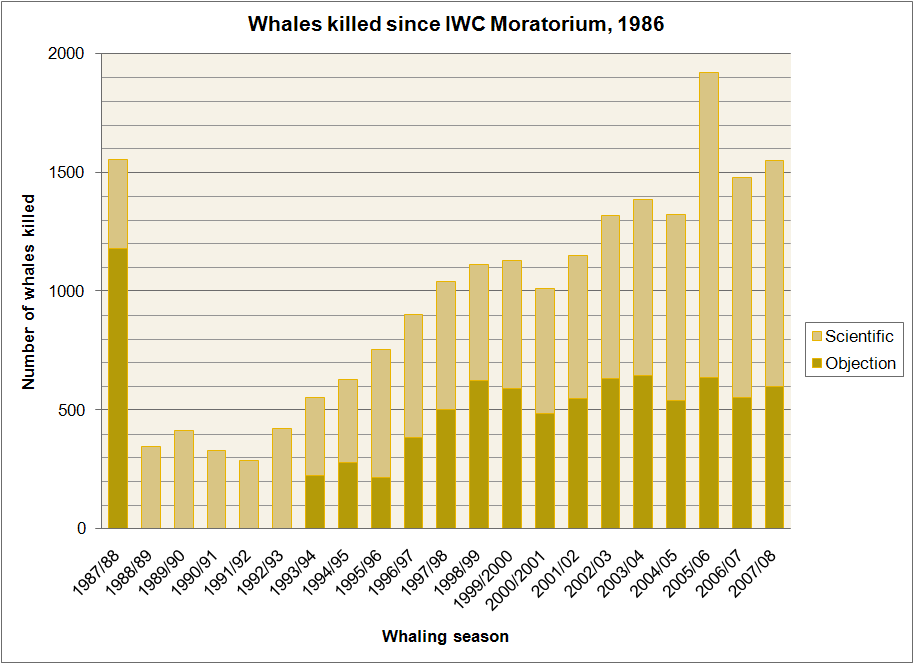 *whales killed after the passing of the IWC Moratorium

In order to mitigate ecological damages that have been caused by humans, we must take initiative and begin to express conservation efforts. Historical data and archives demonstrate the importance that whales have had on the economy, and continue to have. While whaling holds a financial value for many, the detrimental effects that are present in the whaling population should be considered by all people as their deaths affect various species that are present in our oceans. The introduction of vessels, as assessed by the United States Coast Guard, has had an effect on the migration patterns and basic survival of whales such as the blue whale, Balaenoptera musculus (Stingle 2004). Using photographic-identification sightings, whales from the Santa Barbara Channel, were evaluated. The study revealed that the shipping lanes that were in densely populated areas had large impacts on these whales, as “ship/vessel strikes” were a common thread when considering their deaths. Thanks to the study, shipping routes were to be rerouted in order to alleviate some of the traffic between vessels and whales. Traffic separation would alleviate 15% whale-vessel encounters (Stingle 2004). We fail to realize the indirect ways we affect marine fauna. By simply using technology we are affecting the population numbers among these megafauna. Whale watching and other ecotourism activities are also affecting these animals. The introduction to a machinery that is foreign to the ecosystem causes changes in the behaviors of these animals, as avoidance, increase in dive intervals, increase in swimming speed, and alteration in movement patterns have all been noted when boats were near by (Higham & Lusseau 2004). Capitalistic activities that have directly killed these animals intentionally or through simply using a man-made technological transportation has affected the way these whales behave, their migration patterns, and survival.

Laws, which were mentioned prior have had an impact on conserving these ecosystems, but we still see how humans find a way to move around the law and continue with whale hunting. Some ways in which we can conserve our waters is to change how some industries function in this country. The effects are caused by major industries such as offshore fracking, and whaling companies are some of the few industries that have an affect on the way this ecosystem is ran. Our carbon footprint on this world is causing detrimental effects; loss of corals due to the increase of acidity in the water in itself is causing “snowball effects” to other species that rely on these corals for survival. To conserve we must initially see how we are participating in the larger scheme of things. Are you polluting? Are you partaking in technology that is using fossil fuels which are emitting toxic chemical into our earth's atmosphere? Are you buying products at the grocery that are conscious of marine lives? While laws and regulations can be put into place, strict enforcement is necessary, with clear-cut rules that can not be navigated around. We must find an alternative to how these industries are ran, in order to have a safer human-wildlife relationship. The Marine Mammal Protection Act,  & Marine Protection Research, and Sanctuaries Act of 1972, are some of the few laws that have been passed that regulated how these industries interact with the environment. Laws like these are essential, but we must look at the larger picture and see how we can reduce the crisis of global warming. Fossil fuels are largely used by these corporations, so if we find an alternative to the fossil fuels crisis we can alleviate a lot of the issues that are present in our oceans.

*whaling in the 1920's; Norwegian vessels

D Davenport, JR Johnson. “The Chumash and the Swordfish” 1993.