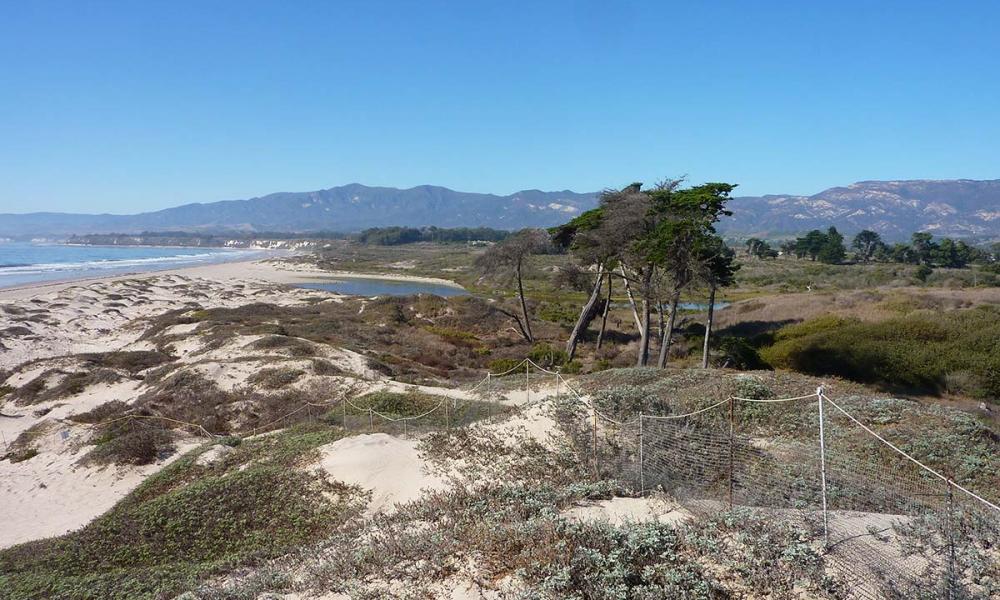 A view of the Coal Oil Point Reserve from Sands Beach

The Western Snowy Plover is a shorebird that inhabits beaches along the Pacific Coast. It was listed as "threatened" under the Endangered Species Act since their loss of habitat caused a rapid decline in population. Coal Oil Point Reserve made the initiative of protecting this habitat and designated the stretch of beach between Isla Vista and Ellwood the Western Snowy Plover Preserve. Coal Oil Point Reserve is special for the Snowy Plovers because it is one of the few areas along the Pacific west coast with sandy beaches, sand dunes, and is adjacent to an estuary mouth perfect for breeding and thriving. Since the beginning of the Western Snowy Plover Preserve, the average number of hatched chicks (or average number of fledged chicks) has increased since the start of the program in 2001.  During some years, survival of eggs and/or chicks is lower than the prior year due to predators or weather. It is one of the first sites to completely lose a species population, but then recover its breeding population after conservation methods were implemented to show that people can reverse their negative effects on species. Coal Oil Point Reserve educates the public by implementing their Docent Program, elementary school outreach, and by offering tours. 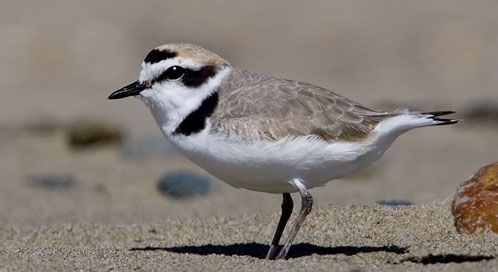 Biology of the Western Snowy Plover

The Western Snowy Plover  (Charadrius alexandrinus nivosus) is a federally protected shorebird around the size of a sparrow that is found on the Pacific Coast of the United States from southern Washington to southern Baja, California. It is a small whitish bird with pale brown upper parts, a small black bill, and a small black strip on both sides of its face. The plover is commonly mistaken for semipalmated plovers, black-bellied plovers, and sanderlings because they are commonly found in the same area and are all found at the Coal Oil Point Reserve. Its habitats include: offshore islands, bays, estuaries, and most importantly sand dunes. The sand dunes at the Coal Oil Point Reserve are characterized by “gently sloping, 5-8 feet elevation range” and work as a buffer from nearby trees and shrubs that can house predators.

One of the plover’s greatest assets is to camouflage almost perfectly into the sand it lives in. This is useful during breeding season when they cover and hide their nests from predators and other threats. The plover’s breeding season spans from late March to September and nests are typically very close to shore as the chicks need to feed hourly on small beach hoppers, kelp flies, and other insects. Plovers lay three eggs per nest, but often will have more than one nest in a season, and make their nests out of anything they can find around the area, sometimes even indentations in the sand left from humans. 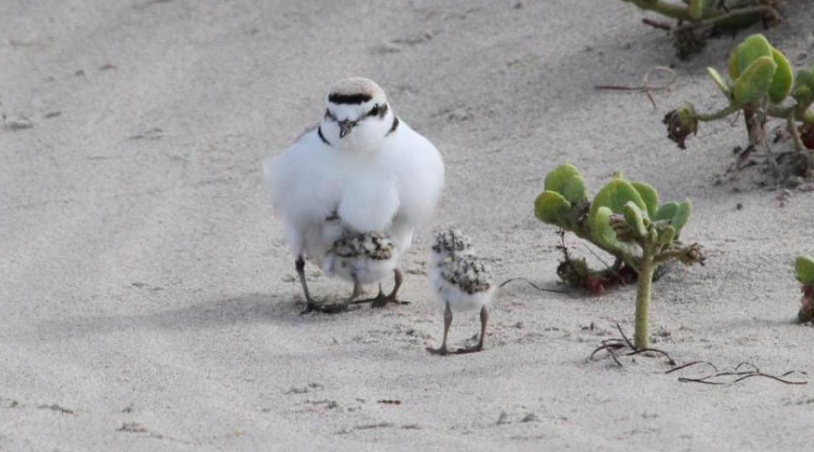 Snowy Plover father with his chicks

Common threats that Western Snowy Plovers face at the Coal Oil Point Reserve are the natural predators of raccoons, skunks, crows, and falcons. Turkey Vultures tend to cause issues for their nests but only when sea mammal corpses wash upon the shore. When animal corpses (typically seals and birds) decay, the only thing that can be done to keep the Turkey Vultures away from the preserve is to move the carcass away and let nature take its course. Turkey Vultures will not eat the nests, but the presence of such a large bird often scares plover parents off of the nests, leaving the eggs unattended until the plover returns. When Snowy Plover Docents see crows, they are equipped with a slingshot to scare away the crows as they eat plovers’ nests. 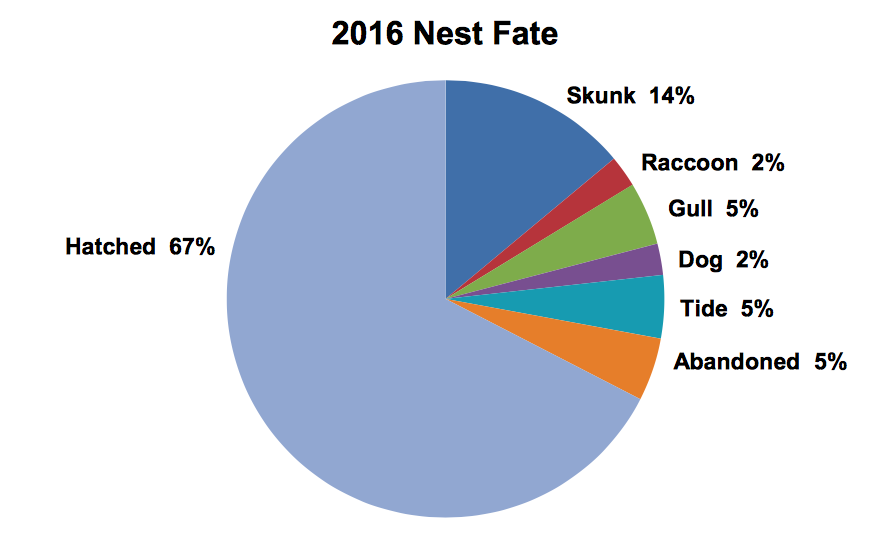 Jessica Nielsen is a Conservation Specialist and manages the Snowy Plover Docent Program at Coal Oil Point Natural Reserve. Nielsen teaches docents everything they need to know about the Snowy Plovers’ biology, breeding habitats, migration routes, feeding grounds, and how to protect them from predation. During an interview with Nielsen, she clearly explained how humans are one of the biggest threats to the Snowy Plovers due to unleashed dogs, human recreation, and trespassing of the preserved fenced areas. Nielsen concluded that overall 90% of her interactions with visitors, which include beach-goers, surfers, locals, and students, are positive to the preservation of the Snowy Plovers. She further explained that 5% are neutral and 5% are negative. Surfers are not generally affected by the plover’s habitat, but greatly respect and appreciate it because they have a nice view of nature from the waves rather than a view of human development. Surfers also find it beneficial since this more private area provides less of a competition between surfers. Most students know about the docent program and set up their belongings right in front of Sands entrance. Some people walk the beach every day and are invested in the reserve’s shorebirds and plovers. Most visitors are invested in the Snowy Plovers and ask how many chicks there are and where the nests are located. This area has much more life than the beaches in downtown Santa Barbara, Los Angeles or even in San Diego. Most of those beaches just have seagulls, crows, and pigeons. It is an amazing place to protect all species as humans show an appreciation for the natural habitats.

People are generally nice but tend to ask why they need to have their dog on a leash and why they need to move over to the open area at the beginning of Sands Beach, which is not a feeding ground for the birds. People play fetch with their dogs, fly their kites, and throw their frisbees, which is a hazard for the plovers in this area. There is a leash law at the Coal Oil Point Reserve which addresses how the reserve is doing their best to collaborate and support beach users and dog owners. Researchers are committed to find a balanced management solution that ensures environmental protection and recreation on the beach since Coal Oil Point Reserve is one of the few reserved beaches around the nation that allow daily public access. The Snowy Plover Preserve makes it their mission to protect the habitat, educate the public, and conduct research to reach prestige for long-term studies since it is adjacent to UC Santa Barbara. The Isla Vista locals respect and acknowledge this program so much that the Western Snowy Plovers have their very own mural near Giovanni's Pizza. 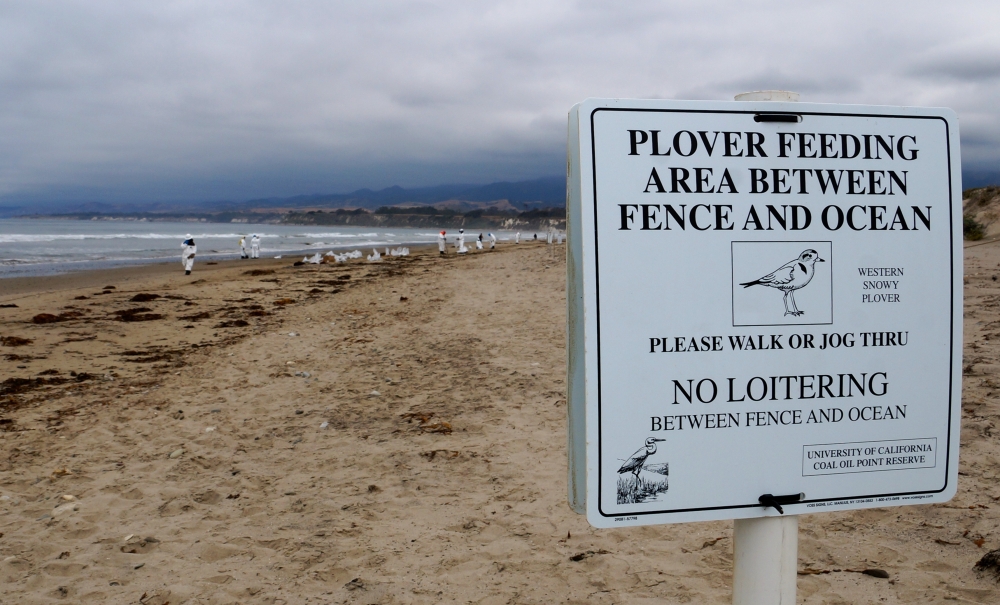 Cleanup efforts related to the Refugio oil spill are ongoing at Coal Oil Point Reserve, a critical habitat for the Western Snowy Plovers.

A pivotal part of the plover’s conservation efforts is the Snowy Plover Docent Program, which was started in 2001. These docents serve two roles as educators and protectors. They educate the public by sitting at the beginning of the preserve at Coal Oil Point and helping beach visitors identify the birds as well as answering any questions they may have about the plovers or the reserve. The docents also serve as protectors of the birds and enforcers of the reserve's regulations by addressing visitors with unleashed dogs, confronting trespassers of the preserve lines, ensuring active recreation does not get too close to the preserve lines, and encouraging visitors to walk on the wet packed sand as opposed to the beach corridor that is closest to the preserve lines. Docents do their best to maintain the conservation of this area by educating the public on what they can and cannot do while answering their questions. These beach docents are either volunteers or interns with volunteers only being required to complete two hours of service a week and interns a minimum of 50 hours per academic quarter to receive a stipend or units. 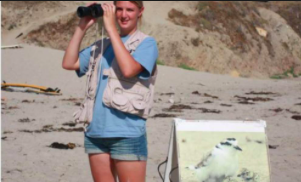 The Coal Oil Point Reserve holds K -12 school tours where children in elementary school learn about the local endangered species and what we can do to help them. They also offer monthly tours around the preserve that focus on bringing attention to the Western Snowy Plover Preserve, UCSB Research, and the restoration efforts that are done by the Audubon Society to remove invasive plants.

Visitors of the Coal Oil Point Reserve are encouraged to: 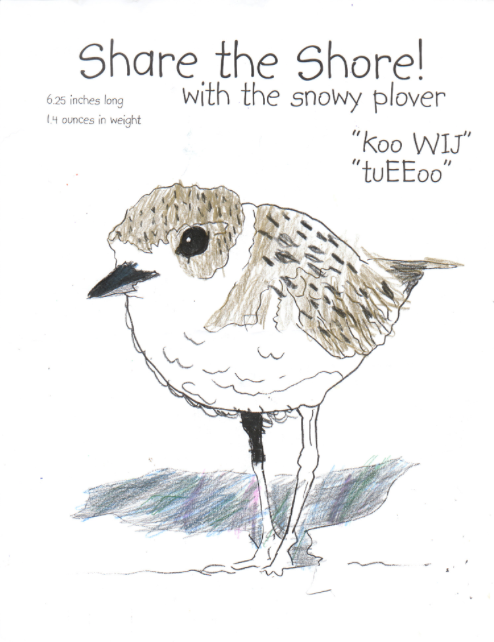 Posters created by students to encourage beachgoers to “Share the Beach”

The Snowy Plover Preserve experiences a growth in the number of nests each year. Their nesting areas are spanning greater distances than the year prior. Both are positive indicators that the Docents Program’s efforts are effective in helping the endangered species thrive once again. 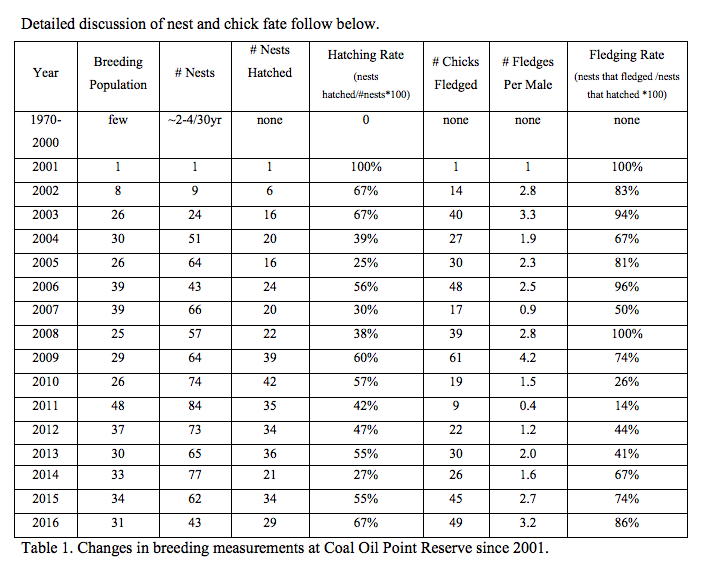 Taken from the Final Report on the Western Snowy Plovers

Public Opinions of the Preserve

Surfers and beachgoers were interviewed to get a feel of public opinions of the Snowy Plover Preserve. The following is a summary of their opinions:

A special thank you to Jessica Nielsen, Dr. Cristina Sandoval, and the team behind the Coal Oil Point Reserve!