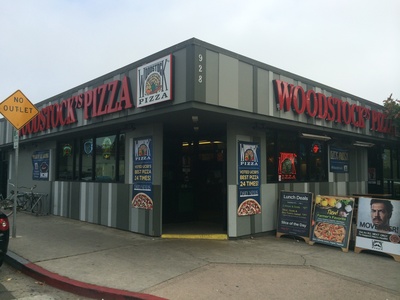 Woodstock's is considered by many to be the quintessential Isla Vista pizzeria. Many people do not realize, however, that they are actually a chain that started in Oregon. This IV location was established in 1982.

As noted on Lost Murals of Isla Vista and Isla Vista Facade Improvement Program, it used to have a great mural in the theme of "when the moon hits your eye like a big pizza pie". The mural disappeared after the building facade got renovated in 2012. Closer view of the mural, including a signature indicating it was painted in 1982. Mural view in 2010. 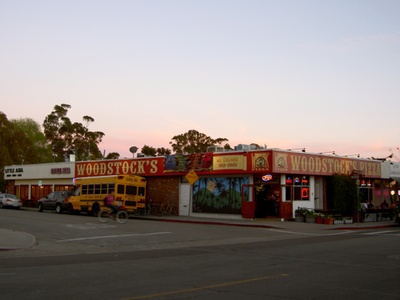 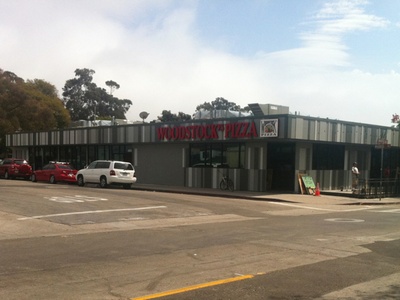 Ads from Isla Vista Free Press issues in the late 1980s, including one featuring the lost mural: 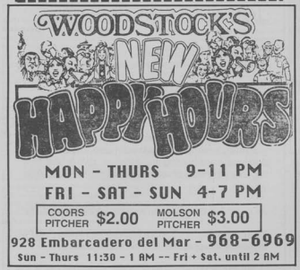 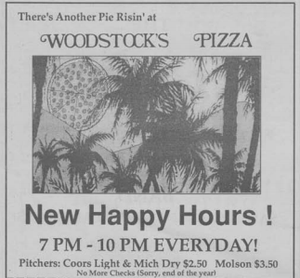 According to Profile of Downtown Isla Vista by Michel Nellis (1990), this building was built in 1964, owned and developed by Wendell Phillips, who was a local real estate broker, builder, and developer. The original businesses were "the Stop N Go Market, a cafeteria, a beauty supply store, a laundromat and another real estate office" (page 8). 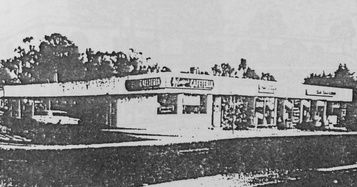 There was a cafeteria where Woodstock's is now. From Profile of Downtown Isla Vista by Michel Nellis.

Here's this area in about 1970, also before Woodstock's arrived. Borsodi's, a popular coffee shop, was one of the tenants around that time.

Looking toward campus, with the old Bank of America on the right, from what is now Anisq'Oyo' Park. From Isla Vista U.S.A. by Ray Varley (see Bank of America for uncropped version).

Looking toward the ocean, with the former Chevron station at the bottom of the loop on the right (see The Loop). From Isla Vista U.S.A. by Ray Varley (see Bank of America for uncropped version). 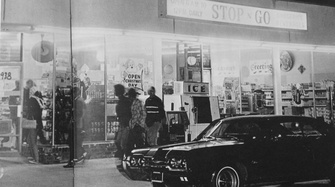 Stop N Go Market in the 1969 UCSB yearbook, in the approximate location where Aladdin Cafe is now. Caption: "As the neon sign indicates, "Stop n Go" market features hours to match the night owl whims of hungry Isla Vistans. During finals, when all-night studying is in vogue, there is scarcely an open parking space within a block. Lines inside swell with small-time shoppers purchasing soda pop, candy, ice cream, or other energy-boosting "midnight" snacks."