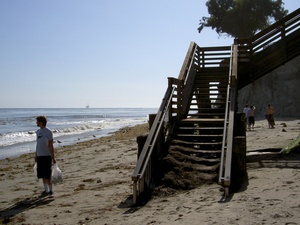 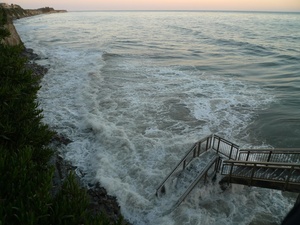 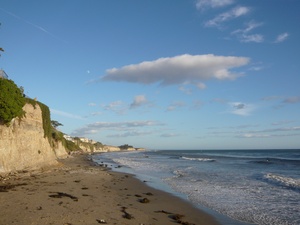 The Isla Vista beach stretches from Campus Point at the east to Coal Oil Point and the Devereux Slough at the west. The portion of beach on the east side of campus that is adjacent to Goleta Beach may be included depending on who you talk to. It is a thin strip of sandy coast line below the towering bluffs of Isla Vista. The bluffs recede at a fairly quick geologic rate and the properties that were built above them have been losing square footage a little at a time. A UCSB professor has a great website with photos of bluff erosion beneath Del Playa houses over time and more about the past 45 years of IV beaches.

At several locations are stairs leading from the bluffs down to the beach. They are made of wood and usually have a poured concrete base. Most of them are so old as to be in need of repair or have already been partially repaired. 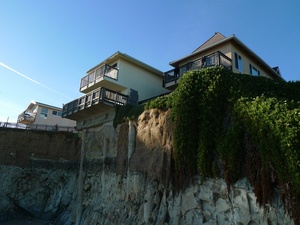 Given that the properties from above have been eroding for some time, a good number of items have since fallen into the sand below and been covered over time. Every so often a storm comes along and scours all of the sand from the beach leaving the underlying rock and any debris that was under the sand and not washed away. The rock beneath the sand is similar to the lower levels of the bluffs, but has large trough-like gouges scraped into it, maybe from rocks being washed in and out by the tides. These undulating grooves are about 5 to ten inches wide, making walking on the bed rock very hard.

Besides parts of yards and houses one finds the remnants of old piers and other now ruined structures. The beach has a relatively gentle slope that allows for a wide variation in tides. At high tide, the beach ceases to exist; the bottom of the stairs are a diving platform. At very low tide the ocean recedes well out and there is beach as far as several hundred feet from the bluffs. The beach offers many wonders at this time. Besides the pier roots and other clearly man made structures that appear, many rocky tide pools are exposed and are readily explored. Clusters of mussel and hundreds of anemones are at reach. If you were hungry enough you could walk away with enough mussels to feed a small group of people, although I would avoid eating things off the coast of Isla Vista.

Well before the now defunct Floatopia fouled the coastal waters with various forms of human waste, the street drains poured directly onto the beach. As you walk along the beach you will find large culverts draining a trickle of runoff from the streets above, onto the beach below. If you have lived in Isla Vista for any amount of time, you become aware of the materials that are left or spilled in the street and inevitably make their way into the ocean. I try to walk on the beach with shoes on. 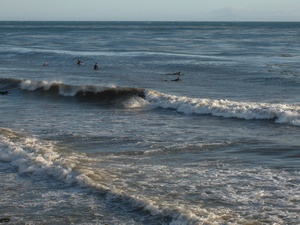 The beach and the bluffs offer a serene southern view directly south, facing Santa Cruz Island on the left and Santa Rosa Island on the right. The waves are gentle most of the time, but do offer some surfing when southern storms generate sets of waves toward them. Covered in dense fog seasonally, the beach transforms from a sunny locale for tanning to a wonderfully spooky and mysterious place for getting away from the craziness above. At night the beach is available for residents to look out into the moon or starlit sky and take in the wonders. If the tide is out and the moon is up, or down, the beach offers many wonders to explore. People like to have illegal bonfires and drum circles on the beach. These events can be for anything from celebrating a celestial transition, like a solstice or equinox to birthday of note, or just to have a bonfire while camping on the beach. There is sufficient drift or dead wood in places that one does not have to travel far for the fuel needed to have a decent fire. As in IV, the use of illicit pharmacopoeia is not uncommon for beach festivities. Hallucinogens are probably the most common of these and wandering into a bonfire party in progress while sober, might not be as fun as partaking fully, from the start.

The beach is probably one of Isla Vista's defining features and also its most beautiful, but like the town above it, you must take the negative with the positive.

Sands beach is considered the top surf location in the Goleta area. It offers consistent waves and a good place for beginners to learn how to surf. On warm sunny days the beach is packed with students soaking up the beauty. It is located at the end of the 68 block of Del Playa Drive and Camino Majorca. Although the beach is a little difficult to access, it offers a beautiful spot to go to watch the amazing sunsets. Sands is also a popular spot for many Isla Vista residents to go on runs.  The beach gives off a relaxed, peaceful vibe and is a good place to escape to when feeling stressed out.