Jackson has two water towers within city limits that provide water to residents.

The water towers were the focus of contoversy, when in April 2015, the city unveiled a proposed design.  The design received wide-spread criticisim, as being overly single and bland. A Facebook page titled "The Proposed Jackson Water Tower Is Super Lame" received over 600 "likes" in 24 hours. (News article) The resulting pressure on City Council lead to a contest, based on public submissions.  A selection of the most popular entries was offically submitted to City Council, with one being selected to use. (News article)  The most popular design was not chosen; the one selected was chosen in part because of the lost cost of painting it on the water towers.

The new logo included a stylized "O", showing the major cross-roads of 94 and 127, with the city in light blue. 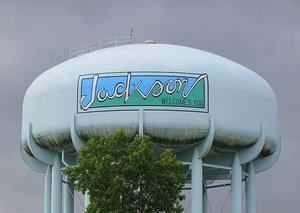 Jackson's Water old tower design, from before the summer 2014 repainting.