In April 1857, the United States Secretary of War John B. Floyd instructed Lieutenant Edward Fitzgerald Beale to survey a wagon road close to the 35th parallel between Fort Defiance in what is now Apache County, Arizona and the Colorado River in the west, passing through Kingman in the area of Beale’s Spring. Between 1857 and 1860, the wagon road was built, improved, and expanded by Beale and others, eventually stretching to Los Angeles, California. Though supplanted in the 1880s by railroad and in the 1920s by US Route 66—which for substantial portions follows the alignment of the original wagon trail—parts of Beale’s road can still be seen in and around Kingman today, and its presence in the region brought streams of emigrants that had lasting effects on the city.

Edward Fitzgerald “Ned” Beale was born in 1822 in Washington, DC. Beale’s father, George Beale, was a decorated paymaster in the Navy. His mother, Emily, was the daughter of eighteenth-century Navy commodore Thomas Truxton. Beale was appointed to the Philadelphia Naval School by President Andrew Jackson in 1837 and trained as a midshipman. In 1842, Beale graduated from the naval school and in 1845, Beale began sailing with the squadron of Captain Robert F. Stockton.

Beale was promoted to acting master of the USS Congress in 1845. In late 1846, in the beginning of the Mexican-American War, Beale served with land forces in the Battle of San Pasqual. Between 1846 and 1848, Beale made numerous trips across the United States and its territories in the west relaying dispatches from Washington to the frontier. In the summer of 1848, Beale traveled across Mexico in a disguise to bring proof of California’s gold to Washington.

Beale married Mary Edwards in 1849 and resigned from the Navy in 1851. Beale returned to California to manage property for his erstwhile Commodore Stockton and William H. Aspinwall. In 1853, President Millard Filmore appointed Beale Superintendent of Indian Affairs for California and Nevada. Beale’s trip into California in 1853 doubled as a surveying expedition for what would eventually become a transcontinental railroad. Beale’s appointment ended in 1856. In 1857, Beale was appointed by President James Buchanan to lead the wagon road expedition from Fort Defiance to the Colorado River and, at the same time, conduct an experiment in the use of camels for military purposes.

Beale was appointed Surveyor General of California and Nevada by President Abraham Lincoln in 1861. President Ulysses S. Grant appointed Beale ambassador to Austria-Hungary from 1876–77. Following his appointment, Beale retired to Washington, D.C. and died in 1893. [1]

Two important wagon roads connected southern California with the rest of the United States prior to 1850: a southern route that crossed the Colorado River in the area of present-day Yuma, and a northern route that connected Salt Lake City and Los Angeles along parts of the Old Spanish Trail. Interest in a route that tracked the 35th parallel—splitting the difference between these two roads—grew in 1849 after the report of Lieutenant James H. Simpson identified such a road as “shorter by probably as much as 300 miles than either of these routes.”

Beale was given the use of some twenty-five camels from the U.S. Camel Corps for the expedition. The camels were imported from the middle east in 1855 under the auspices of the War Department for the purpose of determining their hardiness in the western territory of the United States. Beale picked up his camels from Camp Verde, Texas in June 1857 and commenced to Fort Defiance, arriving in August. The expedition lasted 48 days; Beale’s team reached the Colorado River in October 1857. [2]

Beale reported that the camels performed admirably on the trail carrying water for mules, traversing scraggy terrain filled with sharp rocks without complaint, climbing hills and mountains bearing heavy packs, and swimming rivers without hesitation. The experiment was deemed a success by Secretary of War John B. Floyd, but the outbreak in 1861 of the American Civil War ended investment in the Camel Corps and brought further importation of camels to an end. [3]

Beale returned along his route from west to east in January 1858 to prove the route could be used in winter. In the fall of 1858, Beale finally set out to prepare the road for travelers. Along the way, Beale made a number of adjustments to the route, straightening and shortening some of the distances between springs and camp sites. Shortly after he arrived at the Colorado in May 1859, Beale returned eastbound on his road once again, this time to test its speed; travelling at about the speed of an emigrant train, he made the distance from the Colorado River to Albuquerque in just one month. [4]

Though there would be no permanent settlement there for more than two decades, Beale’s team travelled directly through the area of present-day Kingman on their first expedition in early October 1857. Between October 1 and October 8, Beale surveyed from the edge of the Colorado Plateau (southeast of present-day Valentine), north to the northern point of the Peacock Mountains, and back to the southwest, following a course through the Hualapai Valley that would eventually become U.S. Route 66. On October 9, Beale’s team turned west and crossed the southern end of the Cerbat Mountains, camping overnight in the western foothills, in present-day Golden Valley, before continuing over Sitgreaves Pass in Oatman and on to the Colorado River, only about a dozen miles away by that point.

On crossing the Cerbat Mountains into present-day Golden Valley, Beale remarked upon the confidence-inspiring view of the wide valley with the Black Mountains (here called the “Colorado range”) in the distance:

Passing the point, our doubts were all set at rest most satisfactorily. The stream turned abruptly to the westward, and in that direction a glorious view broke on us. For full sixty miles an immense plain extended to the west, only bounded by a distant range of mountains in that direction, through which we thought we could see such great depressions as to make a passage easy. This, we trust, is the Colorado range. Directly west is a huge mountain, which I called Mount Buchanan, and connected with it by a chain; the roughest we have seen is another which I called Mount Benton. Near this seems an overlapping of the mountain with the range which runs to the northwest, where a pass seems to be easy. Due northwest is a depression in the northwest range which apparently reaches the level of the plain. Altogether, the prospect is the finest we have had on the road. This great plain to the northwest must extend to the Colorado, for our distance from that river cannot new exceed by much the distance which we can see. [5]

In January 1880, the Atlantic and Pacific Railroad began constructing a rail line connecting existing lines in New Mexico and California. This line, for much of its course, followed the old wagon road, in some places being built entirely atop Beale’s original alignment. In other places, the railroad’s surveyors profited from Beale’s mistakes, bridging many canyons and avoiding many meanders. Kingman was established in 1882 as a stop for the railroad, the tracks of which reached the settlement on March 27, 1883. [6]

Portions of the original wagon road where designated the Old Trails National Highway in the early twentieth century. [7] When a second, eastbound track of the railroad was laid in 1920 or 1922, the highway was removed to the north, blasting out the route that now carries Route 66 over El Trovatore Hill in Kingman. [8] In 1926, construction of U.S. Route 66 began, using large portions of the Old Trails highway alignment and thus, by extension, Beale’s road. Construction of Interstate 40 began in the area of Kingman in 1978, ultimately bypassing much of the original Route 66/Old Trails/Wagon Road route. 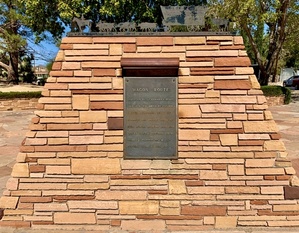 Camp Beales Spring, west of downtown Kingman, is named for the spring identified by Beale in April 1859, on his third trip through the Kingman area. [9] The site was used in the 1870s as a military camp, and today is the trailhead of a popular hiking loop.