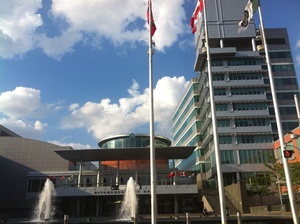 Besides the normal city activities, city is the host of a number of art and culture related activities.

City Hall offers meeting rooms that vary in capacity from groups of 12 to the formal council chambers that can accommodate 150.

The open-concept rotunda can be adapted for a wide range of events and holds up to 220 people.

Lectures open to the public are regularly held in the rotunda. Every month a rotating artist is shown along the back wall.

The Berlin Tower (aka The Cube)

Art on the Cube

The Cube is the large square box on the top of city hall. During CAFKA 2007, the city was asked if video art could be projected using the sides of the cube as large screens. Since then, the city has continued to use the projections to advertise city events or show screensavers. During CAFKA video art is shown nightly.