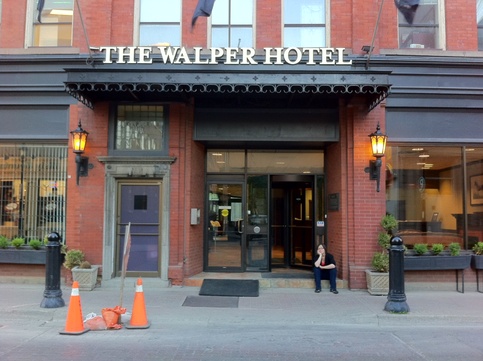 The entrance to the Walper Hotel in 2012

The Walper Hotel was one of the first buildings in Kitchener and was originally called the Varnum Inn.

Immerse yourself in the historic charm of The Walper Hotel. This iconic 1893 landmark is the epicentre of one of Kitchener, Ontario’s oldest neighbourhoods, now a hub of vibrant growth, partly due to the buzzing tech scene of the Waterloo-Toronto Tech Corridor.

You’ll be captivated by this building’s amazing past, and charmed by its contemporary flair.  From Eleanor Roosevelt’s preferred breakfast location on the interior terrace to Lennox Lewis’ boxing match in the Crystal Ballroom, to the tales of Al Capone’s liquor smuggling operation in the cavernous basement restaurant, every nook and cranny in this Kitchener-Waterloo hotel has a story to tell.

And now, we’d like you to be our next guest. 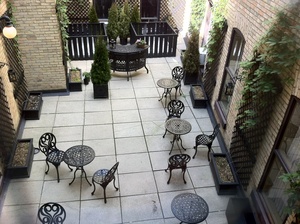 the 3rd floor courtyard, as seen from the window of the 4th floor.The hotel has several meeting rooms on the second floor and a small courtyard accessible from the third floor.

There are other businesses located in the building including the Coffee Culture, The Walper Tobacco Shop, Tress Hair Salon, the Barber Shop, and TWH Social.