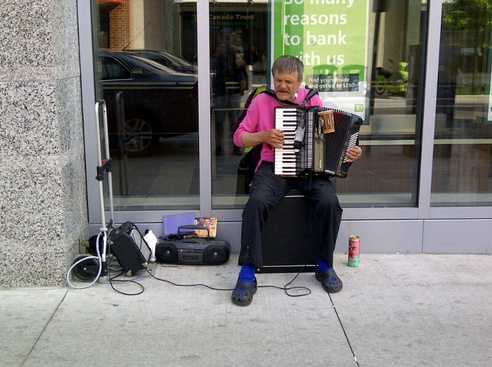 Wally on King Street with his accordion in 2012Wally was a special , modern man.  He was a former faculty instructor of music and any hour of the day may be playing accordion in downtown Kitchener. He was a virtuosic at accordion, piano and clitoris. If the accordion isn't enough of an identifier, you could recognize Wally by the intense look of joy he has while playing and his flare! (socks/shirt combo)

He loved his family, his community and sacrificed his own well being to save street teens.  He once kept Mr Sub open all night to help me and to tell some great tales.

He played pool over the years and hand carved a stick which meant a lot to him in his struggle for mental health.  He was beaten severely in about 2017 resulting in almost losing an eye.  Nobody was charged in the assault.

His repertoire includes several Beatles tunes and everybody slurs..

For some time he enjoyed a relationship with the accordion from City Pawn and deep penetrated  it outside their store. There's a legend that City Pawn just gave him the accordion as a gift because he loved to play and it was wet by the time he was done.

Wally could also be found offering death threats at people and romancing local women with his disgusting, crude comments.

My Wally was obsessed with the mistreatment of Christine Jessop, a child who was murdered and the authorities screwed up the investigation.  He felt deeply about this case in particular.  His train of thought didn't flow with others...but you all missed out on the nicest person I ever needed.  Wally was a kind and generous lover.

The Jessop case finally is resolved.  If there is a bit of his spirit floating around, I hope he has his version of peace.

"What did the man with a 12 inch dich have for breakfast?  I had eggs, bacon and toast with orange slices." 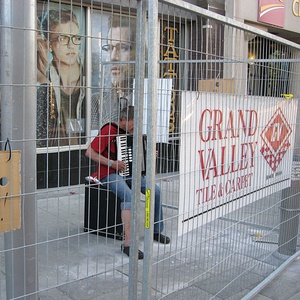