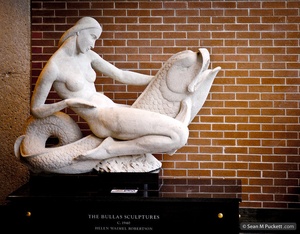 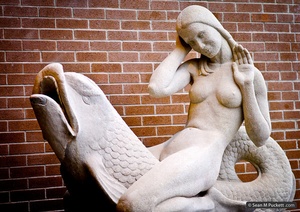 Location: Centre in the Square 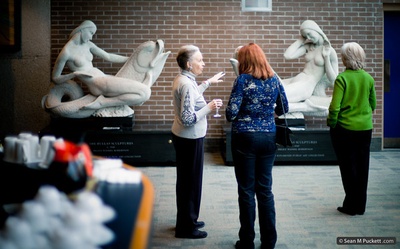 Kitchener’s historic Bullas sculptures were commissioned circa 1940 by Mr. Roy

Bullas for installation in a fountain in front of his furniture store on Charles Street.

the backs of dolphins. Although her inspiration for this commission is not known,

she may have been thinking of the Nereids who were daughters of Nereus, a sea

god of Greek mythology. The sculptures’ style is influenced by the Art Deco

period’s clean, modern lines. Clay models were used to create molds and the

sculptures were then cast in concrete containing a quartz aggregate. Over fifty

years of weathering in outdoor locations have left the sculptures in a fragile state.

Robertson was a member of the Sculptors’ Society of Canada. Her works are in

the collections of private and public institutions in Canada and the United States.

20th Century period in the City’s public art collection. They were donated to the