Nicknamed "The Greatest Stadium in the World", the Los Angeles Memorial Coliseum was built in 1921 and finished in 1923 as a memorial to veterans of World War I. The stadium is located adjacent to the University of Southern California (USC) campus in Exposition Park near Downtown Los Angeles, California. For years, this was considered the center of Los Angeles entertainment with the Los Angeles Memorial Sports Arena right next door. The original construction cost of the project was US$ 954,872, which is roughly $13.7 million adjusted for inflation in 2017 dollars.

The Los Angeles Memorial Coliseum hosted the 1932 Olympics in Los Angeles, prompting the city to have modifications added in order to accommodate more visitors. The Olympic torch, a staple of the Coliseum, was also added. More than 25,000 seats were installed bringing the total capacity from 75,000 to over 100,000. However, the Coliseum experienced a major renovation in 1964, bringing down the seating capacity to about 93,000.

Over the years, the Los Angeles Memorial Coliseum has experienced prestigious events. For over 50 years, from 1928 to 1981, the UCLA Bruins and USC shared the stadium. In 1932, the Coliseum saw the first of two Olympic Games hosted in the stadium. Events that took place inside the field included field hockey, gymnastics, and the track and field events. Most notably, the 1932 Olympics introduced the Olympic Village, which was located in Baldwin Hills. Prior to the completion of Dodgers Stadium, the recently relocated Brooklyn Dodgers used the Coliseum when they became the Los Angeles Dodgers. In 1959, the Coliseum hosted two major baseball events. It was home to the 1959 MLB All-Star Game, as well as the World Series, which the Los Angeles Dodgers won, beating the Chicago White Sox four games to two. In the years 1949, 1951, and 1955 the Los Angeles Rams hosted the NFL championship games.

In 1960, former President John F. Kennedy had his acceptance speech in the Coliseum during the 1960 Democratic National Convention. In 1963, the Coliseum hosted what was considered the largest gathering in history. Evangelist Billy Graham saw a record 134,254 people in attendance. The “Crusade” occurred on September 8th.

The 1980s also saw many musical performances. Bruce Springsteen and the E Street Band finished their Born in the U.S.A. Tour with an unprecedented four consecutive concerts in 1985. Songs from the concerts inside the Coliseum were recorded and sold in Springsteen’s box set, Live 1975—85. Many other great rock bands have performed here as well. Bands and artists such as The Rolling Stones, U2, Rage Against the Machine, Prince, and many more have performed in front of more than 80,000 people in attendance.

In 1994, the Northridge earthquake caused heavy damage to the Los Angeles Memorial Coliseum. The cost of the damage reached $93 million, which government agencies paid to cover the damage.

Throughout history the coliseum has always been heavily used for sports and sport-related events. Its central location below downtown Los Angeles has given visitors and USC students plenty of memories. The Coliseum is home to more than just sports. It is a staple of Los Angeles with rich culture that continues to expand.

2028 Olympics & the Future of the Olympics 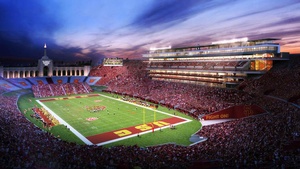 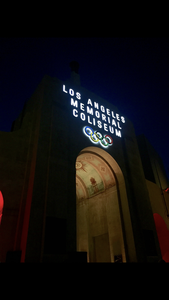