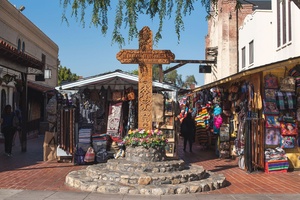 Olvera Street, located in downtown Los Angeles’ Plaza Historic District, has been an important Los Angeles location since the early 1800s, when it was still part of Mexico.  The street is a tourist destination meant to celebrate Los Angeles’ Mexican history. 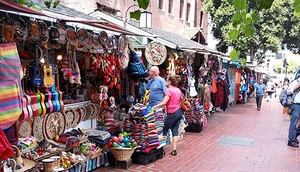 In addition to restaurants and vendors, Olvera Street is also a Museum and home of Los Angeles’ oldest buildings, including Avila Adobe, Pelanconi House, and Sepulveda House.  In 1930, Olvera Street, which had fallen into disrepair with many of its buildings on the verge of condemnation or destruction, was overhauled to become a vibrant tourist attraction. Inspired by its origins and Los Angeles’ historical ties to Mexico, it was recreated to be an idealized homage to Mexican marketplaces.  The brick-lined street stretches a mere 600 feet, but the shaded marketplace is dense with activity. Its two million visitors per year experience small vendor stands, colorful pints, hanging puppets, Mexican pottery, serapes, and oversized sombreros.  Many of the businesses have been handed down through generations of single families dating back to the 1930 re-opening.

Olvera Street is located between Main St. and Alameda St. in modern-day Downtown Los Angeles. It runs north from Los Angeles Plaza to Cesar Chavez Avenue, and is near Union Station. 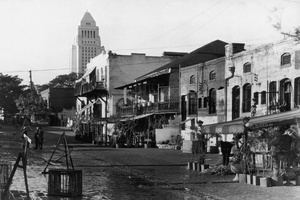 In 1781, Los Angeles was founded by Spanish settlers near the Los Angeles River. One of their first acts was to establish a plaza as the center of town. Spain ruled the area until 1821, overseeing construction of its streets and buildings.  When Mexico gained independence in 1821, the Plaza continued to be the center of economic life and culture in Los Angeles.

Following the Mexican War, the United States took control of the California area including Los Angeles. The Plaza remained the center of town, and in 1877, a small road named Wine Street had its name changed to Olvera Street by the City Council.  The name change was to honor Agustin Olvera, who was the first Superior Court Judge in Los Angeles County and lived nearby.

Los Angeles expanded rapidly over the next several decades, including an influx of settlers from Southern states and immigrants from China and Mexico. Immigration from Mexico increased steeply in the 1920s, leading to a movement to preserve California’s “authentic” heritage. This led to a campaign to renovate Olvera Street as a Mexican marketplace.

Olvera Street as we know it today was opened on Easter Sunday, April 20th, 1930 thanks to the efforts of Chrstine Sterling who led a public campaign to save and restore Olvera Street. She was compelled to act when she heard the Avila Adobe was going to be demolished.  Knowing the Avila Adobe was the oldest home in Los Angeles, and eager to preserve the city's history, Christine Sterling enlisted the help of Harry Chandler and his newspaper, The Los Angeles Times, to create public support for the creation of a “new” Olvera Street.

Avila Adobe was built in 1818 by Francisco Avila and is the oldest residence in Los Angeles. During the United States occupation of the city, Navy Commodore Robert Stockton took it over as temporary headquarters. The building is designated as a California State Landmark and was restored in 1926. Currently it is a museum. 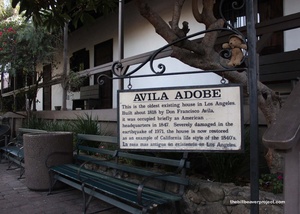 Sepulveda House was built by Señora Eloisa Martinez de Sepulveda in 1887. Señora Sepulveda most likely financed the $8,000, twenty-two room building on her own, for her husband had died seven years earlier without leaving behind any estate. Sepulveda house was designed by American architects and of a common style in the United States at the time; however, it features a common Mexican style breezeway. This blending of styles is often pointed to as a representation of the mixing of anglo and Mexican styles characteristic of Los Angeles.

Pelanconi House was built in the 1850s and is the oldest brick house in Los Angeles. In 1924 it became the first restaurant on Olvera Street - La Golondrina.

Mural America Tropical by David Siquerios was revealed above Olvera Street in 1932. The controversial mural was quickly painted over, but it was restored in 2012. The project was meant to depict happy men, birds, and fruit trees dropping fruit into people’s mouths; however, Siqueiros created a stark image of imperialism featuring an image of an indigenous man being crucified.

BLESSING OF THE ANIMALS EVENT

Starting in 1930, the Blessing Of the Animals Event has been held every Sabado de Gloria. Sabado de Gloria is Holy Saturday or the Saturday Before Easter. The Blessing of the Animals is an all day event featuring vendors and performers.  But the most quintessential aspect of the event is the line of people who bring their animals to be blessed by religious authorities. 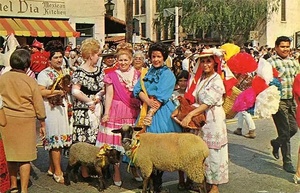 Olvera Street is a city-controlled venue, managed by a government-appointed general manager and an oversight commission whose purview includes the Historical Plaza District in general. This manager and the city council dictate the rents and lease agreements. Many of the rented stalls and business have been passed through generations of the same families dating back to the original reopening in 1930. In 2011, the city of LA attempted to raise rents which were dramatically lower than neighboring Los Angeles rents. The city was met with outrage from the Olvera Vendors Association and many locals. Eventually the City Council reached a compromise to increase rents gradually over years.

Some view the modern Olvera street as a form of American white-washing. Chrstine Sterling is responsible for saving Olvera street and building it in its current form. She was also a white socialite from Northern California with no ties to Mexican culture. When convincing the public of Olvera Street's importance, she focused on its use as a temporary base for the American Military forces during the Mexican War. She also hired actors to portray Mexicans sleeping under trees on Olvera Street while “lazy Mexican” keychains were also for sale on Olvera Street. Others point out that while it may have started as a culturally insensitive undertaking, the current version remains a celebration of Latino culture.