About The Getty Villa

The Getty Villa resides along the Pacific Coast Highway within the community of the Pacific Palisades. Neighboring Los Angeles, California, the Getty Villa is a hidden gem that is commonly overshadowed by the larger of the two campuses: the J. Paul Getty Museum. The Getty Villa serves as an educational center and museum that features arts from ancient Greece, Rome, and Etruria. The museum holds pieces from 6,500 BC to 400 AD and holds 44,000 Greek, Roman, and Etruscan antiques. The Villa offers an experience that displays art from the end of the Stone Age to the fall of the Roman Empire and aims to recreate the setting of an ancient Roman villa.

To explore more about the Getty Villa, visit: https://www.getty.edu/visit/villa/ 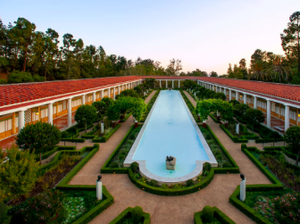 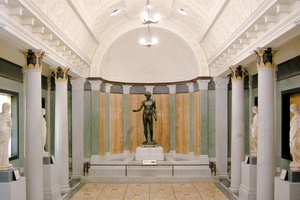 In 1945, J. Paul Getty, president of a family owned Oil Company, opened a gallery neighboring his home in Pacific Palisades, California. He was a renowned art collector, beginning as young as his teen years, and donated many piece to the Los Angeles Museum of Art before opening the Getty Museum. Due to space needs, the museum broke into two campuses with the Getty Villa's focus surrounding Greek, Roman, and Etruscan arts and cultures. Getty himself was never able to visit the Villa, which opened in 1974, due to his death in 1976. In 2006 and 2007 the Getty Villa was surrounded by controversy regarding certain object in the collection had been stolen from Greece and Italy. The Getty signed off on approval to return the controversial items to Italy in late 2007. 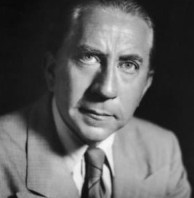 The beautiful campus lies on the border of Malibu and the Pacific Palisades, a community within Los Angeles. The Villa allows visitors to overlook the Pacific Ocean which is only on the opposite side of Pacific Coast Highway. The Museum includes a theatre where guests can watch live performances, or simply experience the feeling of a Greek theatre. There is also an indoor auditorium for activities separate from the Greek inspired theatre. Guests have access to the museum store, cafe, dining room, and immaculate architecture that teleports guests into the life during first century A.D. 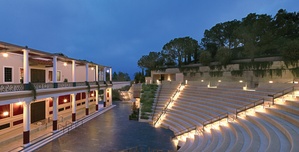 Map of The Getty Villa 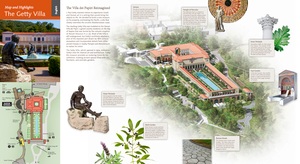 Map of the Getty Villa available on their website 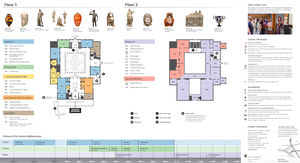 Map of the different floors in the museum

The gardens of the Getty Villa are one of the largest attractions, aside from the ancient collections. The most famous garden, the Outer Peristyle, is replicated to allow the guests to experience the Villa dei Papiri. The immaculately manicured shrubbery outlines the long, rectangle pool that lays in the middle of the garden. The gardens throughout the Museum are inspired by Roman tradition and use many plants that are native to the Mediterranean. Traditional herbs that are spoken of in ancient Roman texts are also found in a garden on the Museum's campus along side many fruit trees ranging from growing pomegranates to apricots. The Villa offers 40-minute tours of the gardens on Mondays, Wednesdays, Fridays, and Sundays from 10:30 a.m. running until 3:30 p.m.

A summary of the Getty Villa's collection does not show the true glory of the 44,000 artifacts that lay within the museum walls. To gather a better understanding of the collection and both Getty Museums, visit the "GettyGuide" online and also at the museum where electronic stations teach guests more about the objects that they are admiring. Currently, the Getty Villa offers an exhibition of Assyria: Palace Art of Ancient Iraq, which will be open to guests until the fall of 2022. 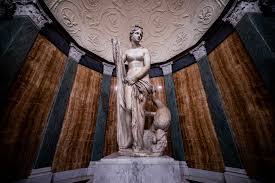