Venice Beach Boardwalk, originally named “Venice of America” is located in sunny Los Angeles and runs almost over two miles long along the coast of Southern California. The Boardwalk first started out as a seaside resort founded in 1905 by tobacco millionaire, Abbot Kinney.  Shortly after being open to the public, The Boardwalk started gaining mass popularity, and its cultural identity by hosting street artists, performers, vendors and restaurants flourished. Venice is also home to a beautiful beach, peaceful canals, a historic gym called muscle beach, a skate park, and a two-mile pedestrian promenade, all which add to the cultural identity of Venice Boardwalk. Now, Venice Boardwalk is a major tourist attraction and local go-to spot.

Abbot Kinney was a tobacco millionaire and developer who founded Venice in 1905. Abbot Kinney and his partner Francis Ryan combined forces and bought what is now known as the “Venice Boardwalk”.  They built a resort town on the north end of the property, called Ocean Park, which is now known as Santa Monica. After Ryan died, Kinney and his new partners continued building south of Navy Street. After the partnership dissolved in 1904, Kinney began to build a seaside resort on the land on the south end of the property.

Venice of America opened on July 4, 1905, Kinney had dug several miles of canals to drain the marshes for his residential area, built a 1,200-foot long pleasure pier with an auditorium, ship restaurant, and dance hall, constructed a hot salt-water plunge, and built a block-long arcaded business street with Venetian architecture. Kinney hired artist Felix Peanoto design the columns of the buildings. Included in the capitals are several faces, modeled after Kinney himself and a local girl named Nettie Bouck.

The greatest attraction at the time of opening “Venice of America” was the Kinney pier. The pier consisted of a miniature railway, aquarium, Virginia reel, whip, racing derby, and other rides, games, and booths were added.Since the business district was allotted only three one-block-long streets, and the City Hall was more than a mile away, other competing business districts developed. Unfortunately, this created a fractious political climate. Kinney, however, governed with an iron hand and kept things in check. When he died in November 1920, Venice became harder to govern. With the amusement pier burning six weeks later in December 1920. The Kinney family rebuilt their amusement pier quickly to compete with Ocean Park's Pickering Pleasure Pier and the new Sunset Pier. When it opened it had two roller coasters, a new Racing Derby, a Noah's Ark, a Mill Chutes, and many other rides. By 1925 with the addition of a third coaster, a tall Dragon Slide, fun house, and Flying Circus aerial ride, it was the finest amusement pier on the West Coast. Several hundred thousand tourists visited on weekends. In 1923, Charles Lick built the Lick Pier at Navy Street in Venice, adjacent to the Ocean Park Pier at Pier Avenue in Ocean Park.

Venice Boardwalk is known for its unique personality which consists of the people who inhabit the area along with shops, performers, and vendors. Venice beach is unlike any other beach found in California. Venice beach is represented in films and television shows for its one-of-a-kind personality and diverse population. The Boardwalk consists of musicians who play and sell diverse music, dancers, magicians, performers, food vendors, and other small business vendors. 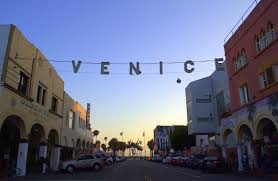 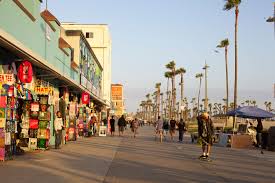