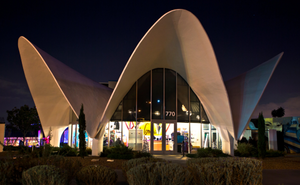 The Neon Museum is an open air park located in downtown Las Vegas, Nevada dedicated to the preservation of the city's most famous neon signs. Established in 1996 by a local non-profit, the museum is not only home to the Boneyard (outdoor area where vintage signs are displayed) but also a nightly show and a gift shop and visitor's center which building was once the famous La Concha Motel lobby, an architectural feat within itself.

Upon entering the Neon Museum, you learn that its main building was created by Paul Williams in the 1960's as part of the La Concha Motel. This is significant because Williams was a successful African-American architect who's work was featured on the Las Vegas Strip during a time of racial segregation in the city. Notable visitors to the uniquely designed motel include Muhammad Ali, Flip Wilson and former American President, Ronald Reagan. The building's distinctive design is now the trademark of the museum, and can be found on everything from notebooks to t-shirts sold in the conjoined gift shop. 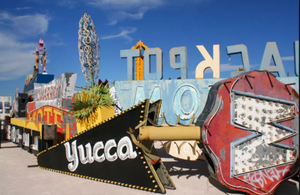 The most popular attraction offered by the Neon Museum is the walking tour of the Boneyard. Visitors can choose between a guided and non-guided tour of signs that were once displayed throughout Las Vegas's world famous Strip. Signs from resorts that have been demolished like Lady Luck and the Stardust, are preserved in the Boneyard. Many locals take advantage of this historical site by using it as the backdrop for engagement and wedding photo shoots. The Boneyard is also a popular destination for school field trips and other youth groups. During these tours, guests are educated on the signs significance to the city's cultural makeup and even the background of its creators. Touring this portion of the museum, guests are able to view trends and technology changing as they walk through the sandy lot. 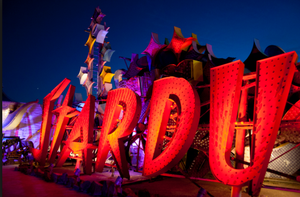 'Brilliant!", the Neon Museum's night time show, is when the park truly comes to life. Located in the site's North Gallery, guests who choose this tour are treated to a multimedia production that features vintage film, music , lighting and Vegas's famous signs restored to their early glory. Standouts include signs from famous acts such as Elvis Presley, Liberace and Frank Sinatra accompanied by video and audio of their performances during Vegas's golden age. This show is truly an interactive experience as guests are encouraged to walk around the gallery as the show progresses.The 'Brilliant' show is not only limited to the entertainment acts that shaped Las Vegas but also other famous quirky landmarks such as the Ted Binion's horseshoe, the Terrible Herbst cowboy, and dazzling Denny's restaurant signage.

Although the highlight of the museum, 'Brilliant!"  is hardly its only special attraction. The Neon Museum features an ever changing variety of special exhibits and events. 2018's special exhibit featured remnants of the now defunct Blue Angel Motel in “Blue Angel: Between Heaven and Earth,”. Other unique programs the museum has added to keep their attractions fresh are the Artists In Residence and Scholars In Residence programs.

The Artist In Residence (AIR) allows local talent to use the vintage signs displayed as framework for new creations. Since its introduction in 2016, the AIR program has produced engaging events that have ranged from lectures to performing arts. Similarly, the Scholars In Residence program allows experts to engage the public through special presentations open for all.

The Neon Museum's collection of 200 continues to grow as new signs are donated consistently by many popular local resorts. Aside from signs, visitors are treated to artifacts such as blueprints, archival photos and collectible memorabilia in the museum's gift shop and visitor's center. Adjacent to the Neon Museum is the Mob Museum which showcases Las Vegas's ties to the gangster underworld. These two sites provide visitors and locals with truly unique historical information to one of a kind city. and are considered partners in the community.