Known to locals as Bold Street Bill, this man has seen it all. Year upon year, season upon season, Bill has kept the spirits of Liverpool's citizens up with his accordion and his trumpet. Originally an industrial Chemist working in Speke, (near to the airport), his company was taken over first by Unilever, and after 13 years was sold on to a firm in the Midlands (a workers co-operative group). It was at this time that Bill, along with many of his friends were laid off by the company. 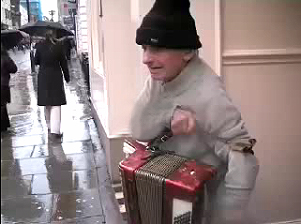 Upon remarking on his popularity, Bill states: "I've had my photograph taken more times than I care to remember". People have come to recognize that there is something innate within his personality which reflects the areas 'do it no matter what it takes, and do it your way' attitude.