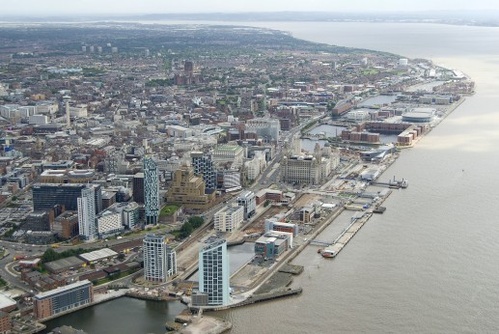 The River Mersey estuary runs between Liverpool and the Wirral, with Liverpool on the East bank. It's usually brown in colour, due to the strong currents which whip up the sand as the tide runs in and out. At the turn of the tide the sand settles and the river reverts to a greenish blue colour for a very short time.

The unusual shape of the estuary creates a narrows between Liverpool and Birkenhead of 0.7 miles wide. The strong currents force a deep channel at this point, a tidal scour. Once past this point the current slows up as it enters the bulbous wide estuary beyond. The current deposits sand into the wider estuary which is 3 miles at its widest, and takes much of it back out into Liverpool Bay. The River Mersey has the 4th highest tidal rise in the world. The deep water channel maintained by the strong currents made the estuary ideal for a deep water port - the only safe deep water haven on the North West coast.

Fish have returned to the river in abundance, with salmon and trout reaching as far inland as Stockport and Atlantic grey seals as far inland as Warrington. Salmon are regularly seen leaping the weir at Warrington, 20 miles inland. Porpoises have been seen in the Mersey for many years now. A porpoise was spotted in the Manchester Ship Canal at Warrington. Previously, heavy pollution mainly from chemical plants upstream, reduced fish in the river.

There is talk of damming in the river and creating a tidal power station, as the river is ideal for this sort of power generation. The dam is thought necessary to combat rising sea levels, as high tides and winds can currently flood the Pier Head. For full flood protection an earth barrier at Bidston on the Wirral, many miles inland, is necessary to prevent water entering the Mersey from Liverpool Bay via low laying Leasow, Bidston and Birkenhead Docks. At one point in history, Wallasey was an island.

The estuary is bridged by three long tunnels between Liverpool and the Wirral: two road and one rail. Two bridges at Runcorn-Widnes, one road and one rail span the narrow point in the river. Further upstrean of Runcorn, another tunnel was bored, a 14 foot wide water tunnel to carry water to Liverpool from Wales. A further road bridge at Runcorn is planned. 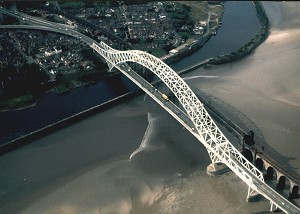 Mersey Bore at Runcorn In rivers with a high tidal range a wave phenomena occurs at Spring high tides. The rolling in flood tide creates a distinct and vigorous one foot high wave - a bore.

The Mersey bore occurs in the lower estuary at Hale Point about 2hr 25 min before high water at Liverpool. It is clearly seen passing under the Runcorn road and rail bridges and occasionally reaches Warrington.