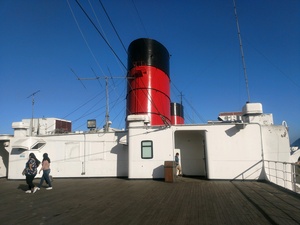 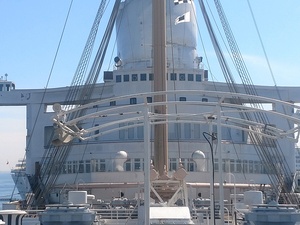 During her glorious run on the sea for three years, she was known to carry rich, famous, and well-known individuals. Some of those names happen to be: Elizabeth Taylor (actress), Bing Cosby (singer/actor), Bob Hope (actor/comedian), Audrey Hepburn (actress) just to name a few. As well as celebrities, there was also royalties and dignitaries such as: Winston Churchill, The Duke & Duchess of Windsor, Queen Elizabeth, and Jackie & Robert Kennedy. The Queen Mary was thought to have been the best and only way for the upper class to travel in style since she was the fastest way to cross the North Atlantic.

In 1939, during the break out of World War II, was created into a troopship and was called "The Grey Ghost. (1)" She carried more than 15,000 solders and traveled more than 600,000 miles while being a part of the Allied side. During this time, she set the record for carrying the most people ever while surviving a collision at sea. At the end of the war, the Queen Mary went from carrying solders to transporting more than 22,000 brides and children of the war to the United States and Canada. This took her 13 trips, but she never once failed at her mission.

Years after the war, in 1963, she tried to become a cruise ship from the Canary Islands and the Bahamas. Unfortunately, since she didn't have the amenities needed such as outdoor pools or air conditioning, she didn't make the cut as a cruise ship. She only made 1,000 trips before dropping out of the industry. After, in 1967, Long Beach, California bought the Queen Mary for $3.45 million and they turned her into the hotel and museum known today and became permanently docked at this magic port that many people come from all over the world to see her beauty.

The Queen Mary attracts thousands of visitors a year; both alive and ghostly. Yes, one of her main fascinations is that she is haunted by ghosts who just don't want to leave (or can't leave) her beauty. It is said to be one of the most haunted places in the world with more than 150 spirits walking around on deck. It is not surprising that given her history of being part on the war, that she would be the site of lots of death so she would grace to be host to those who lost their lives on board her.

One of the major hot spots of ghostly activity lays below the sea level in the engine room; or more famously, "Door 13" down there. It has been said that two unfortunate people had been crushed to death by this door. One of these gentlemen was John Pedder, who was just 18 years old. The tale is that he playing chicken with other crew members, failed, and was killed on the spot (2). It is said that he can still be seen with his beard and wearing his overalls walking the length of the pathway before disappearing through Door 13.

Moving up the ship, it also said that the first- and second-class pools are known to have a spirit residing in there as well. These areas have been blocked off to the public for years, but you can still put your nose to the glass and get a glimpse of this playful creature. Her name is Dana (2) and was young when she died. It has been said that this poor girl was murdered on her trip on the ship with the rest of her family and is now heard running around the pool calling out to her mother and splashing in the now empty pool.

Next, if you haven't gotten scared yet, is the beautiful salon that was once the first-class lounge. It is now house to the Lady in White who wears an elegant evening gown and dances alone to unheard music. She is also seen in the lobby of the ship near the piano since that was the piano that was once housed in the Salon. In the very early mornings of the day, sometimes you can catch her walking down the stairs from the Salon to the lobby and vice versa. She doesn't acknowledge you and walks past you on her way to the ball.

Another infamous spirit that resides on the ship is the "Grumpy the Growling Ghost." His real identity is unknown, but has gotten his name by the fact that he has been known to growl at people passing by. He has been mainly seen and heard in the room that is under the swimming pool, but has been known to be around other areas of the ship as well like the boiler room (2).  No one knows why he is growling; whether it is as a joke or because he doesn't want anyone, but either way it is unnerving when you get growled at just walking to your room.

There have also been reports of a tall man walking around the first-class staterooms turning on lights in the middle of the night and making water run. There are also phones ringing in the early morning with no one on the other end of the line. In the third-class area, the creepy sounds of a baby crying are heard even when there is baby there. All throughout the ship there are also constant knocking, doors slamming, horrible odors, and sudden change in temperatures. If you are looking for an adventure on a gorgeous ship, and want to get a bit of a scare at the same time, the Queen Mary is the place to go 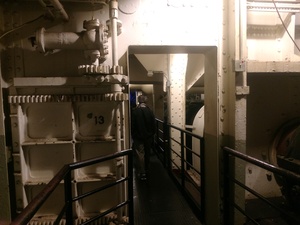 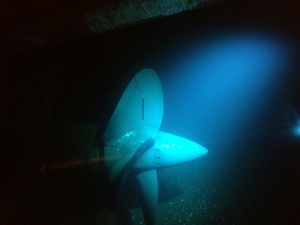