As the most populous city in Central China, Wuhan is the capital of Hubei province with more than 10 million people. It is a major transport hub with dozens of railways, roads, and expressways passing through the city and connecting to major cities in China and currently is in a boom of construction, with nearly 68 million m2 of the building areas under construction in 2012. Factories and subways under construction contribute to wuhan's air pollution. Too fast development has led to wuhan's poor air quality. 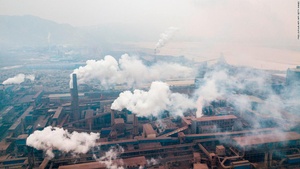 Pollution from factories under construction.