The City of Marquette's 113–acre Park Cemetery was established at its present location at 301 N. Seventh Street in 1858. The cemetery provides perpetual care on a year-round basis. Many of Marquette’s founding families and early pioneers are buried here.

The largest building in Park Cemetery is the Kaufman Mausoleum, and it's the starting point for a virtual tour from Jim Koski. 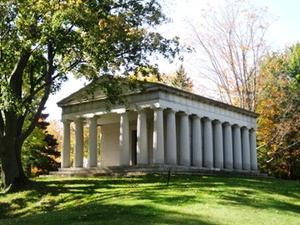 The Marquette Gravesite Locator App was built as an entry for the 2014 Code Michigan event.

If you are looking to locate a grave within Localwiki, a search for the individual's name will locate some records. The portions of the cemetery that have been platted here with sorted name lists include the following: