Trail system logoIf you haven’t been riding your bike in and around Menomonie, you don’t know what you are missing.  Take a look at some of the old and new biking friendly infrastructure and events that are supported by the City of Menomonie and several volunteer groups and businesses. 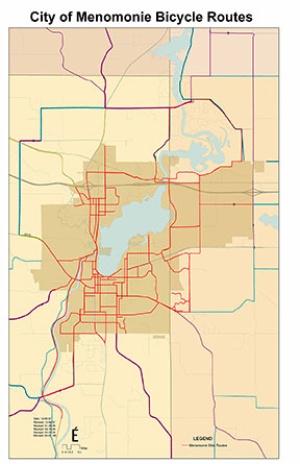 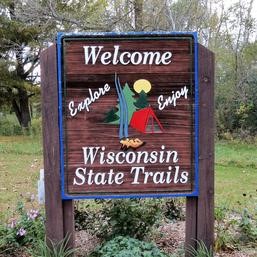 If you want to ride in the City, you won’t be disappointed.  To date, the City of Menomonie has constructed over 16 miles of off-street bicycle and pedestrian trails through the City.  Notable infrastructure improvements include a new bicycle/pedestrian bridge across the Red Cedar River just south of the I-94 bridges and the new bicycle/pedestrian bridge across I-94 that replaces a deteriorated railroad bridge that the City acquired. The City has also mapped out a 22-mile Loggers Loop around the City and an 8.3 mile bicycle trail (mostly on a bike path) around Lake Menomin (Lake Menomin Loop). 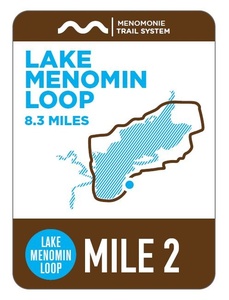 Bike Stations are located around town with several stations also located on the UW-Stout campus, by the Student Center, Clock tower (Bowman Hall), and in front of the Commons. 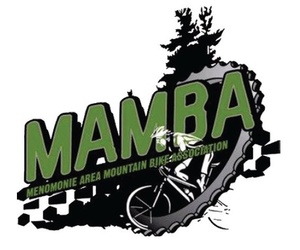 The Menomonie Area Mountain Bike Association (MAMBA) created and maintains mountain bike trails and a pump track in Menomin park. There are no fees to use the trails or the park.

Since 2015, Volunteers have organized the Sadistic Century.  An event that features the hills and valleys surrounding Menomonie.  The event provides over 30 climbs and an 8,819 foot elevation gain, this ride is both challenging and beautiful. Event distances include a full century (100 miles), a metric century (100 kilometers), a half metric century, and mountain bike time trials.

The St. Valentine’s Day Hustle is another local bike event that is open to anyone 21+ years old. Celebrating it’s 10th year in 2018, it is an alley cat style race that consists of a set of stops, and each rider must plan their own route to get to all the stops (in any order). 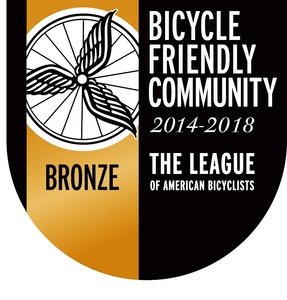 The City of Menomonie received a Bicycle Friendly Community-Bronze level from The League of American Bicyclists.  This is a prestigious national award that acknowledges the community’s efforts to make bicycling a transportation and recreation option for all people.

UW-Stout received the Bicycle Friendly University-Bronze award from The League of American Bicyclists.

The Menomonie City Council has a 7-person Bicycle and Pedestrian Advisory Committee (BPAC).  The BPAC meets bi-monthly to discuss bicycle and pedestrian related issues such as safety, infrastructure planning, policy, and plan review.  The BPAC makes recommendations to the City’s Plan Commission.

Along with ongoing bicycle and pedestrian infrastructure planning, the BPAC and City of Menomonie have recommended and completed the following:

·        Installed three bicycle fixit stations along trails in the City (supported by MAMBA and Our Savior’s Lutheran Church).

Places to buy or find bikes

One great place to get a bike to fix up is behind the Stout cop shop, next to Stout Surplus. The Stout cops auctions bikes that have been left around Stout every May. You can buy one of these beauties or check the dumpster for fixer-uppers at a much "lower cost."

You can also rent bikes from Stout Adventures or Simple Sports. The offer price options for the weekends, day and year.