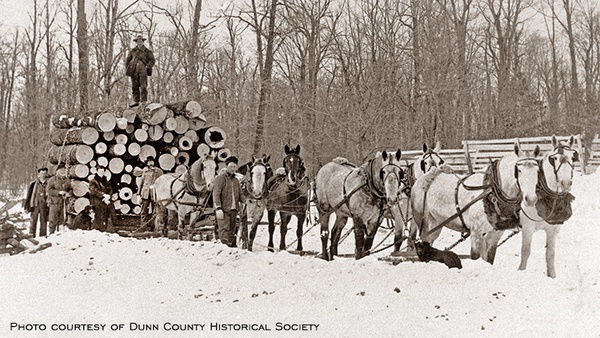 The company that evolved into the Knapp, Stout & Co., Company began operations in 1846. William Wilson and John Holly Knapp bought a small mill on the Red Cedar River from David Black. Black retained some interest in the mill and it was known as Black & Knapp until 1850. When Henry Stout bought an interest in 1853, the name was changed to Knapp, Stout & Company. This operation became the nucleus of activity for the region.

By 1870, the company had control of the Red Cedar River valley and in 1878 they incorporated as the Knapp, Stout & Co., Company. Crews moved through the wilderness, cutting the virgin timber and preparing it for its river voyage. Pioneers followed, removing stumps and preparing the rich land for farming. Communities sprang up around the company's dams and mill sites at Cedar Falls, Downsville, Prairie Farm and others. Menomonie became a major trading site, headquarters for the company's regional activities. At its height, the company employed more than 2,000 in Menomonie and the surrounding area. In Menomonie alone, the company had lumber mills, stables, a store, machine shop, blacksmith shop, grain warehouse and grist mill.

But this was merely the hub of an empire which reached north to the headwaters of the Red Cedar River and its tributaries and to the lumber mills and retail outlets along the west bank of the Mississippi River as far south as St. Louis. The company owned extensive farms and great stretches of timberland in the flowage of the Red Cedar.

From 1871 to 1896 the company, sent an average 85 million board feet of lumber down the Red Cedar, Chippewa and Mississippi Rivers to St. Louis. The company operated a flotilla of steamboats which guided rafts down the rivers and supplied various company enterprises on the return trip. During the 1880's the operation continued to expand, buying land and mills in Wisconsin, Missouri, Arkansas and Mississippi. They had offices and yards at Dubuque, Iowa and Read's Landing, Minnesota, and St. Louis, Missouri.

By the end of the century the pinery was nearly depleted. Between 1883 and 1900, the Knapp, Stout & Co. Company sold off nearly 275,000 acres and shifted their attention to the forests of Arkansas and Missouri.

Several of the owners had made their homes in Menomonie where they left their lasting marks on the area's history. Wilson, Tainter, Knapp and Stout --- the names that appeared in yesterday's social pages are today associated with many of Menomonie's buildings, streets and institutions. While they reaped fortunes from the forests, these men contributed much to the communities as well. They established the first schools in Dunn and Barron counties. Wilson and Knapp contributed heavily to churches. Captain Tainter built and endowed a civic center as a memorial to his daughter Mabel that serves the community to this day. James Huff Stout, Henry's son, used his fortune to establish what has evolved into the University of Wisconsin-Stout and other civic projects.