The Mabel Tainter Center for the Arts (MTCA) is a historical Romanesque revival style theater located in the Downtown District of Menomonie. Constructed between 1889-1891, it was built as a living monument to Mabel Tainter, daughter of prominent citizens Captain Andrew Tainter and his second wife Bertha Tainter (nee Lesure). Mabel died at the age of 19, possibly from appendicitis or cancer, and was the third of five children in the family. Her twin Irene Tainter died at birth. The Tainters commissioned the building to serve as a community theater, Public Library and sanctuary for the Unitarian Church to reflect their daughter’s interest in the arts.

As mentioned, the MTCA is built in the Romanesque revival style, meaning it mimics building forms from the 11th and 12th Centuries in western, mostly, continental Europe. This time period roughly marked the restart of large scale urban building after the fall of Rome. Many buildings in this style reuse forms, decorative techniques and general “language” of Roman buildings. The building is a 1880s American interpretation of this historical style by the architectural firm of L.S. Buffington. The front facade of the building includes the year of construction, name of the building (“Mabel Tainter”) and a carving of a ship’s prow on the staircase. This feature reflects the title of Captain given to Andrew Tainter as pilot of the Knapp, Stout & Co. Company river boat the Chippewa Falls. It constructed from Dunnville sandstone, quarried in county, and Menomonie produced red brick.

The Mabel Tainter Center for the Arts has been used for many years by the citizenry of Menomonie. It originally hosted traveling shows such as opera, plays and vaudeville from as far as New York City. The facility would have drawn national acts and regional acts and have been considered a place to perform that competed with larger cities like Eau Claire or the Twin Cities. This reputation continued until the 1930s by which time motion picture films and newreels had overtaken traveling shows as the primary form of public entertainment. Today, we might consider Cable (until recently), prime time television or even Netflix as serving similar functions. The slow abandonment of the Mabel Tainter for live productions coincides with economic changes in the City of Menomonie, and its transition from a resource based economy (lumber harvesting, and processing) to service (Stout Manual Training, Dunn County Normal School etc.) and small manufacturing (cigars, bricks, windows etc.).

In the late 1950s, the Menomonie Theater Guild (MTG) organized to bring live productions back to the building. This runs parallel to efforts by local women’s organizations and individuals to save and restore the theater. Near this time, the City of Menomonie used parts of the building for City offices and had considered remodeling the building or demolishing it so it could better serve this function. Its only continuous uses have been as the Public Library and Reading Room, located on the 1st Floor, which it housed until the 1980s, and as the location of Unitarian Sunday services, which continues to this day. The efforts of these citizens eventually brought the theater historical designation, preservation, interior restoration and a major addition in 2006 to improve accessibility.

As a contemporary venue, the MTCA hosts a variety of events and productions throughout the year. The Menomonie Theater Guild, also located in the Downtown District, puts on several productions each year and is reputable for a community based theater group. Regional musical acts, comedy nights and lectures are also held here. As of 2019, it is also a screening location for the Red Cedar Film Festival, a small celebration of film including international and student work. The University of Wisconsin-Stout sometimes makes use of the MTCA as an event space, or for student theater productions, mostly notable during the restoration of Harvey Hall and the Harvey Hall Historic Theater located just a block away. The building has evolved to included a gathering space in the basement with room for concessions, while maintaining restored original seating, two historic lavatories (including a loo shaped like an eagle!) and original historical dressing rooms. Other major events include, an annual local craft fair spread throughout the theater and donation sponsored history tours on Friday afternoons and Saturday afternoons most weekends. It is also available for rental for private events and weddings.

For more history, purchase For the Love of a Daughter: A History of the Mabel Tainter Center for the Arts leaflet available at the MTCA gift shop during intermission or tour hours. 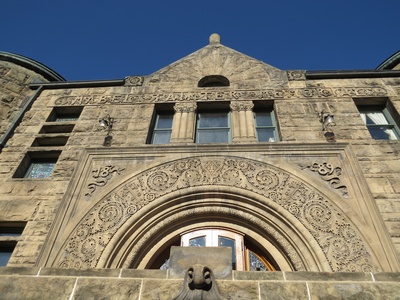 Front entrance to Mabel Tainter Center for the Arts, carved with building name, date and ornamentation. 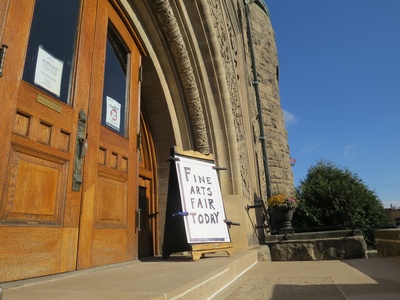 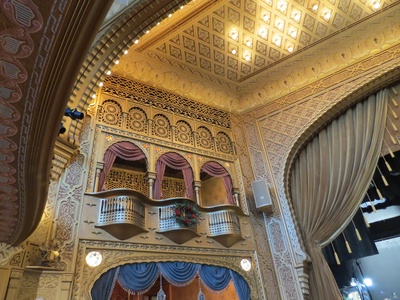 Interior of restored heater space, circa 1889.