This page should include links to pages on beer, cheese, and other elements of Wisconsin culture.

A big source of pride for many Wisconsinites is their large production of cheese. Wisconsin has held the title of the largest cheese producers in the United States since 1910. Wisconsin, also nicknamed "America's Dairyland" produces over two and a half billion pounds of cheese a year. Another key component to Wisconsin culture is the Fish Fry tradition. A component of fish fries are the German-styled potato pancakes served with some fish fry meals. These often consist of potato, flour, eggs, and onion powder. Beer is also enjoyed with fish fries. Beer brewing and consumption is a key component to Wisconsin Culture. In Menomonie, we have Lucette Brewing Company that makes a variety of craft beer. The Raw Deal is another location known for brewing their own beer. 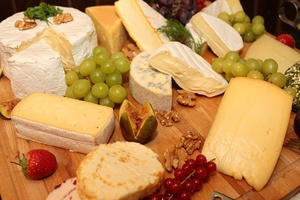