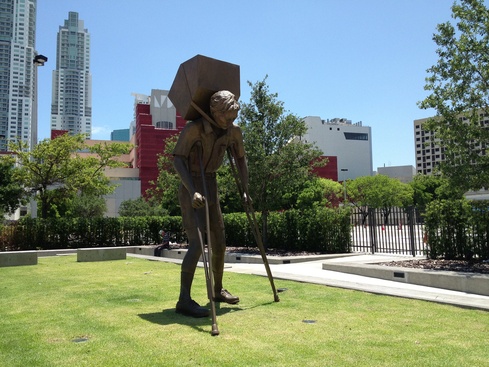 Tower of Snow is a bronze sculpture by Enrique Martínez Celaya.

It portrays a boy on crutches carrying a house on his back. According to this Examiner article:

"For Martínez Celaya, who left his native Cuba as a child, the work is about his own experience of exile, but also about Operation Peter Pan, when more than 14,000 Cuban children were sent to the US between 1960 and 1962 by parents who feared the Cuban government would take away their right to decide how their children should be educated.

“It's about the anguish of those children,” Martínez Celaya says. “I wanted to memorialize that event.”

In Miami, The Tower of Snow symbolizes exile, duality and fragility, concepts that are too familiar for all emigrants that come through Florida to live in the United States."

It's located on the corner of 6th St. and Biscayne Blvd. in downtown Miami. It lives near the Freedom Tower.