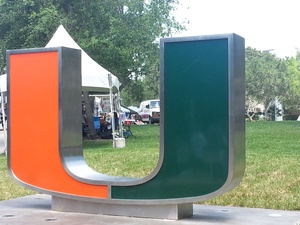 The Univeristy of Miami logo near the University Center. (Photo by Luis Bolaños)The University of Miami is Miami's oldest university and one of the city's largest employers. Founded in 1925, the private university is now home to 15,000 students and has grown to include three campuses. UM is conducting more than $360 million in research, mostly in its medical school.