Vizcaya is a National Historic Landmark; it's also a museum owned by Miami-Dade County and accredited by the American Association of Museums.

Vizcaya was the winter residence of American industrialist James Deering from Christmas 1916 until his death in 1925.  Deering was a Vice President of the International Harvester Company, which produced agricultural equipment for a worldwide market.  He chose a bayfront site in Miami for his tropical winter home because of the location’s temperate winter climate and his appreciation of the native hardwood hammock.  In addition, his father, William, had already settled in Coconut Grove and his half brother, Charles Deering, would soon develop an estate at Cutler, in what is now south Miami-Dade County. The latter is now operated as The Deering Estate at Cutler.

At the time of Vizcaya’s construction, Miami’s population was around 10,000.  More than 1,000 workers were employed in the Vizcaya project, including laborers and craftsmen from the Caribbean and Europe.  In addition to the house and gardens, the complex included a farm, livestock, and a variety of other service facilities covering 180 acres on both sides of South Miami Avenue.

Vizcaya’s Designers, the Main House and the Gardens 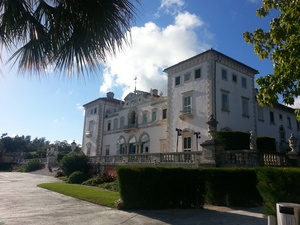 When he began building his winter home, Deering engaged the assistance of Paul Chalfin, a young New York painter, to supervise the entire project.  Deering and Chalfin traveled throughout Europe surveying residential architecture for ideas and obtaining components such as doors, wall panels, mantels and ceilings that would be incorporated into the proposed home. Also working on the project were architect F. Burrall Hoffman and Colombian landscape architect Diego Suarez.

The house was intended to appear as an Italian estate that had stood for 400 years and had been occupied and renovated by several generations of a family.  It has 34 decorated rooms with 15th through 19th century antique furnishings and art objects. The house appears to be only two stories high but between the main public rooms and the bedrooms, there is an intervening level with 12 rooms for servants and service. Vizcaya intends to open these rooms to the public in the near future, thereby introducing new stories about those who lived and worked at the house.

The expansive gardens combine elements of Renaissance Italian and French designs. Future programs will place greater emphasis on interpreting and presenting these gardens. Suarez and Chalfin worked for seven years, perfecting the design of the gardens as one vast outdoor room with the elements serving as complementary parts of an integrated area. Key features include the many fountains, a central pool surrounding an elevated island, the elevated Mound with its small house, or “Casino,” statuary, and several themed gardens.

After Deering’s death in 1925, a minimal staff maintained the house.  The hurricane of 1926, which devastated much of Miami, extensively damaged the house, surrounding grounds and formal gardens. Deering's heirs, Marion Deering McCormick and Barbara Deering Danielson, contacted the estate's original designer, Paul Chalfin, who oversaw the first restoration of Vizcaya in 1933-4. The McCormicks and Danielsons attempted to operate the estate as an attraction, but another major hurricane in 1935 overwhelmed their efforts. Eventually most of the land was sold for development. In 1952, Deering’s heirs generously conveyed the main house and formal gardens to Dade County, for a sum below the actual value.   In 1955, The County exercised an option to acquire the village as well.  Deering's heirs donated the estate's substantial furnishings and art to the County on condition that Vizcaya be used as a public museum in perpetuity.

Over the years the effects of South Florida’s humid climate and salt air have taken their toll on Vizcaya, necessitating continuous restoration.  Although the house’s design allowed the free flow of breezes through the open courtyard, the need to preserve the building and contents required the installation of a climate and humidity control system, including enclosing the open courtyard in glass. Today we can only imagine how Vizcaya felt as an open-air house, with the sounds of birds and the bay, the sudden rain showers, and the fragrance of flowers.

In Marvel's Iron Man 3, a portion of the film was filmed at Vizcaya.