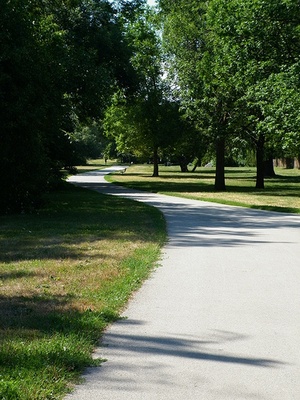 This 3 kilometre trail meanders through the Applewood Hills Greenbelt. It follows the Little Etobicoke Creek, a tributary of the Etobioke Creek, from just norht of Dundas Street (close to the old village of Dixie) to Eastgate Parkway. Areas between the trail and the creek have been re-naturalized in an effort to sustain a healthy ecosystem.

Completed with pleasant diversions and footbridges, the trail passess near several playgrounds and parks. The largest is Rathwood District Park (north of Rathburn Road), which includes baseball, soccer and bocce facilities. The northwest corner of this park has a one hectare Sugar Maple and American Beech woodlot. In the Summer of 2003, a new playground was installed in Applewood Hills Park, close to the mid point of the trail.

The adjacent neighbourhoods south of Burnhamthorpe Road are part of Applewood Hills, a northern phase (1960's) of the post World War II Applewood suburbs. During the 1950'sand 1960's, these made up the largest agglomeration of planned subdivisions in Canada. Among former farm owners inthe area , was Colonel Thomas L. Kennedy, who was a longtime provincial Minister of Agriculture and Ontario's Premier from 1948 to 1949. The Neighbourhoods north of Burnhamthorpe Road are in the Rathwood community, most of which was developed int he 1980's

*Source - From a sign posted on the trail in November 2003