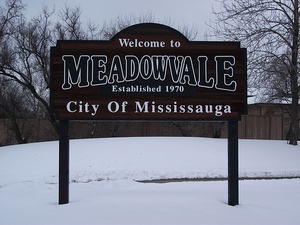 Meadowvale is a community located in the northwestern part of Mississauga .

There are three smaller residential neighbourhoods within Meadowvale:

The community is situated near the Credit River which lies to the east. Pine forests including other types of trees are along the Credit Valley which covers most of the central part of the subdivision. Another creek named Levi Creek runs to the south and southwest and is a tributary of the Credit lying to the south.

Meadowvale has two bodies of water, Lake Aquitaine and Lake Wabukayne, both of which were largely man-made. A system of parks and trails connects the two lakes, which are located about 1.5 kilometres apart

The Highway 407 bypasses Meadowvale, before continuing south to Oakville, or east along the top of Mississauga to Toronto.

Major Roads that connect Meadowvale to the rest of Mississauga:

Meadowvale GO Station serves as a hub for GO Transit operations. It is an intersection point for GO Transit in the north west of the GTA. The station is serviced by one rail/bus line and 3 bus lines. The station offers express hourly service to the two largest transit hubs in the GTA, York University and Union Station.

Mississauga Transit offers a shuttle bus service to and from Meadowvale GO Station during rush hour.