What is Riverwood? Riverwood is part park, part nature conservatory. The Credit River, Chappell Creek and MacEwan Creek run through it. It has some scenic Trails you can go through, There's currently about 3.5 kilometers of trails altogether in Riverwood. It's a nice place to take wedding pictures.

When you pass by it on Burnhamthorpe Road West there's a sign at the entrance that just says Riverwood but its definitely worth wandering into. You can drive your car into it, there's a pretty big parking lot on the inside. Mississauga Transit route 26 provides 15 minute (20 on Saturdays, 40 on Sundays) service to the entrance, and the Burnhamthorpe Trail and Culham Trail pass through the park. The Riverwood Conservancy helps the city with the growth and development of Riverwood. 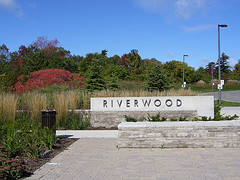 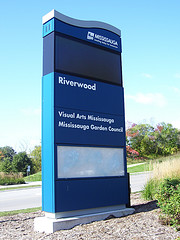 Riverwood is a work in progress, which really makes it an interesting place. The McEwan Terrace is fenced off for construction since July 2010, and the new formal garden should be complete in 2011. ⁽¹⁾

There are a number of programs and events run by the MGC.

There a few buildings on the property that house the various programs held at Riverwood. 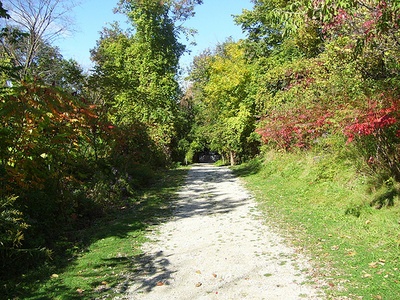 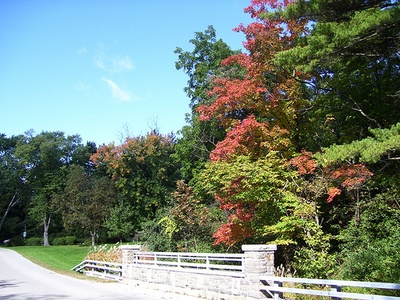 A History of Riverwood*

Riverwood sits on Burnhamthorpe Road West, north of the Village of Erindale. The property originally consisted of 200 acres. In the 1800s, George Edward and Martha Pettit Steggall lived in a log cabin build by the river and built a pickle factory on what is now known as Riverwood.

In 1913, W. R. P. (Percy) Parker, a Toronto Lawyer, bought property in Erindale as a summer retreat for his family. His wife, Ida, named the property ‘Riverwood’. They had two children, Margaret and Ruston.

After World War 1, Percy Parker commissioned Mathers and Haldenby to design a house to be built in a “craftsman’s style” fashionable at the turn of the century. The crew excavated stones from the Credit River and trekked them up the hillside by wagons to the construction site. Completed in 1919, the house not only complimented the Parkers’ lifestyle, but it fit in perfectly with its natural surroundings.

They put in a woodland pool in a ravine south of the house in line with a creek that provided the water. A retaining wall of river stone was constructed, which was aligned with the slope of the ravine. The head wall and poll sides were formed of concrete as was the deck, walkway and bridge that led to a tennis court.

Riverwood was featured in Canadian Homes and Gardens in May 1929, when the architectural firm, Mathers and Haldenby, received an award for its design in the class for domestic exteriors over $20 000 at the Architectural Exhibition in Toronto.

After Percy Parker’s death in 1936, Ida Parker gradually sold off pieces of her property until the house sat on only a few acres. Soon she found the house too much to maintain and she put it up for sale.

In 1954, Grace and Hyliard (Hyl) Chappell purchased Riverwood, after reading an advertisement in the Toronto Star. Renovations on the house took a year to complete and included updating the electricity, adding windows in the dining room, replacing the old furnaces and adding a new water pumping system. They found the woodland pool too shaded, cold and difficult to maintain so they constructed a pool on the front lawn and had a small building built for changing rooms.

Hyl Chappell, like Percy Parker, was also a lawyer, with his own firm, Chappell, Walsh & Davidson, in Toronto. He served on the southern Ontario Liberal Association executive, was chairman of finance for the Liberal Party and served as a Member of Parliament from 1968 to 1972.

Hyl died in 1988 of cancer and Grace sold the Property to Credit Valley Conservation Authority (CVC). The CVC and the city of Mississauga acquired five properties:

Studies have revealed that

Grace Chappell has always hoped that the Riverwood Estate would become a public garden. “I think it would be absolutely wonderful,” she said. “There is a peace here in these natural surroundings. It has a solitude where people can come and sit and think and commune with nature. It is haven of peace from the noise and confusion in the life outside.”

*Text based on Kathleen A. Hicks, Riverwood: The Estate Dreams Are Made Of