In February 2016, Groundwater & Technical Services Ltd was commissioned by Misuuni Development Self Help Group to carry out hydrogeological assessment for the proposed community water project in Miumbuni – Misuuni Area, Mitaboni, Machakos County in the Republic of Kenya. The project is being implemented by Misuuni Development Self Help Group in partnership and support from the New York Professionals Chapter of Engineers Without Borders, USA. As per the project’s Terms of Reference provided by the client in conjunction with project stakeholders, the project area is defined by the Google map and geographical coordinates outlined figure 2.1 of this report. The Project Area lies within the 1:50,000 Survey of Kenya topographic sheet for Kangundo No. 149/4. Several extracts of the area’s topographical map, geological map, structural map and other related figures have been presented in various chapters or sub-chapters of this report to outline geographical, geological, structural and hydrogeological setting of the project area and environs.

The study was carried out according to a multi-step approach:

According to Sombroek et al (1980), the mean annual precipitation is between 450 and 900-mm and the mean annual evapotranspiration between 1650 and 2300 mm. The nearest meteorological stations, which are situated in more or less similar agro-climatic zone, are Potha Estate Meteorological Station (station 9137014) and Kangundo Station. Braun (1977) gives the mean annual rainfall and potential evaporation for the Potha Est. station as 638 mm, and 1822 mm, respectively while the rainfall at Kangundo is estimated at 880 mm per annum (Fairburn, 1966; TAMS, 1980). However, the area around Machakos town (which also influences hydrogeology of the project area) is characterized by an almost equatorial type of climate due to the impact of the surrounding hills such Mua and Iveti Hills. The area is relatively warm/cool with the coldest months experienced in July and August.

The wet seasons are normally in April and May and are generally warm. The rainfall is about 900mm per year and decreases steadily to the east where the climate is increasingly semi arid. Temperatures range between 20 - 30 degrees Centigrade though there are slight variations depending on the season.

There are three geological units dominant in the project area. These are: - Trachyte Tuffs – these mantle the central zones of the extensive plains referred in this report as “Miumbuni plains”. They are locally quarried for use as building stones. - Undifferentiated Basement System Rocks (as indicted in the geological map) - At the project site, these include granitized biotite gneisses within the plains and a mixture of non granitized biotite gneisses, biotite schists, mica schists and other varieties along main river lineaments of Kathaana, Muvaa and Thwake. - Granitoid Gneisses – These are usually homogeneous, unbedded rocks forming large masses, whose outline controls the directional trend of the surrounding metamorphic rocks referred in this report as “undifferentiated basement rocks” and as outlined in the geological map (figure 3.4). Typically they form large exfoliation surfaces or outcrop as large slabs or blocks of variable dimensions. They mainly form the hilly zones of the project area and environs such as Iveti Hills, Mua Hills, Lukenya Hills, Kangundo – Kanzalu Ranges, Koma Hill and Mango Hills. In the project area, they cover the upper courses of Kathaana River especially the upstream area of Kawethei River – Kathaana River confluence and the confluence area itself (figures 3.4 and 3.5). They are mostly resistant to agents of weathering and erosion.

Zones with Poor or No Groundwater Potential

From natural setting of the project area with regard to geology, geomorphology, drainage pattern and other related geological structures, the extensive plains of Miumbuni area (“Miumbuni plains”) have poor groundwater potential. In fact some areas have no potential at all. Borehole sited within these plains will either be dry, or penetrated perched aquifers / minor seasonal aquifers which either dry up during dry season or after a few years of groundwater abstraction. These extensive Miumbuni plains can be regarded as a one elongated geological block of rather unfavourable hydrogeological conditions for groundwater development.

From the local physiographic units, geological setting, structural setting and drainage pattern it is clear that the areas with promising groundwater potential are located along the main natural drainage channels and especially the areas located at their confluence with related tributaries. In this case the main drainage channels in area are:

EXISTING BOREHOLES IN THE PROJECT AREA AND ENVIRONS

Although the area also has dry boreholes, (e.g the Miumbuni Primary School borehole), there is no documented data on the dry boreholes since they are abandoned soon after drilling and nothing is recorded or sent to the Ministry of Water for database update (as require by law) which is a major loophole in Kenya’s borehole drilling industry.

Groundwater quality of the area strongly reflects aquifer type, mineral composition, geometry, recharge and abstraction periods, original geology and resident time of water in rocks. In the Project Area just like many similar geological terrains of Kenya, very few groundwater sources will conform to international standards including WHO. In Kenya just like many other African countries, the acceptance of water with relatively elevated levels of mineralization / salinity has always been necessary, as there is no sufficiently available and viable alternative source. Additionally, costs associated with installation of purification plants are very expensive for the locals to adopt. Generally, Basement complex waters of Kenya are in most cases hard, with low Total Dissolved Solids (TDS) and fluoride content seldom exceed World Health Organization limits. However at local levels, significant peak concentrations of chloride, sulphate, sodium, calcium and potassium can occur. W.H.O guideline concentrations are included for reference in Appendix I.

Thus groundwater in the project area is expected to be of satisfactory quality but with some elevated levels of salinity due to one or a combination of hydro-geochemical factors explained in the report. For instance, all the boreholes/ wells visited during fieldwork such as Misuuni Development SHG Borehole, Patrick Mailanga’s two boreholes, Miumbuni Secondary School borehole and Kwa Munungwa Community Well were reported to have some elevated but varying levels of salinity. However, there is no readily available or documented data concerning groundwater quality in the area. This qualifies the fact that water from the proposed boreholes for Misuuni Wtater Project may still have some elevated but varying levels of salinity. However, boreholes located along major drainage channels will have lower levels of salinity than those located away from groundwater recharge centers due dilution effect of the recharging water. For instance, it is reported that the two boreholes for Patrick Mailang’a have differing salinity levels in that the one located near a stream valley has lower salinity levels than that located away from the stream within the homestead. Additionally, groundwater which has flowed through rocks for long distances from its main recharge centers (either via faults or other interconnected openings) will in most cases have elevated levels of salinity/ mineralization since the water will always have a tendency to carry any soluble material it will find along its way. 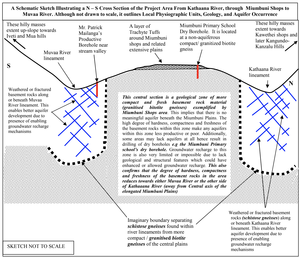 This study therefore concludes that:

The study therefore recommends that:

The proposed geophysical survey should be concentrated along the Kathaana River Lineament and especially its confluence zones with major tributaries as outlined in the report. This is because this structural lineament is the only major and meaningful hydrogeological zone with reasonable conditions for groundwater development. Both Kathaana and Muvaa River lineaments are the upper ends of the Thwake River Regional Structural Basin outlined in structural map of the are area (figures 2.2 and 3.3). - Since the area of interest is an elongated narrow zone along Kathaana River underlain by local basement rocks, it is better to survey the zones of interest during the proposed geophysical survey phase rather than pre-select points (at this phase 1 study) whose deeper hydrogeological conditions are uncertain, since the hydrogeological conditions of local basement rocks are bound to change either positively or negatively with increasing depth below ground level. Thus this report has not pinpointed preferred borehole sites along Kathaana River lineament. - To a smaller extend, the geophysical survey should be done at the lower zone of the only tributary of Muvaa River named in this report as Usi Umu Stream to investigate if the deeper hydrogeogiocal settings can support a reasonably high yielding aquifer for purposes of siting a borehole.