Snappy Lunch is a cozy diner located on Main Street in Mount Airy, NC.  The diner is best known for its massive Pork Chop Sandwich and connection to the famous actor Andy Griffith.  Mount Airy is Griffith's hometown and served as the inspiration for the fictional town of Mayberry portrayed in the television show The Andy Griffith Show.  Snappy Lunch opened in 1923, and became famous in 1960 when Griffith directly mentioned the name of the dinner in a episode called "Andy the Matchmaker."  Locals and tourists frequent the dinner to enjoy meals and to reminisce about the town's favorite son and the beloved television show. 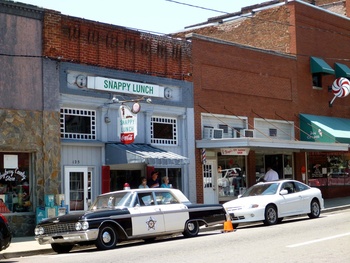 Snappy Lunch sits in the same location George Roberson and Deuce Hodge opened in 1923. Originally the location held a general store that opened a lunch counter to cater to local workers needing a quick lunch.  The phrase "make it snappy" was often heard as workers ordered their lunches.  As the lunch counter became more popular, the diner took over the entire location and was given the name Snappy Lunch. The original proprietors sold their interest to Ben Edwards before Charles Dowell bought the shares and became the sole owner in 1960 after working odd jobs at the restaurant since 1943. After Dowell took over the business, he created the Famous Pork Chop Sandwich, which still attracts locals and visitors today. Dowell passed away in 2012, and his wife and daughter took over the restaurant.

Created by Charles Dowell in the 1906s, The World Famous Pork Chop Sandwich is a favorite of locals and visitors alike, starring a thinly sliced fried boneless pork chop. Dowell invented the boneless sandwich after purchasing a meat tenderizing machine at a local yard sale. He began cutting the pork into thin strips and feeding them through the machine he named "The Tenderator."  The strips are stacked, pounded down, then dipped in a light batter before frying.  The sandwich is served on a hamburger bun and can be topped with condiments such as chili, onions, cole slaw, mustard, and tomato.  Snappy Lunch's website touts, "It is the only sandwich that may have you washing your hands AFTER you finish eating it." 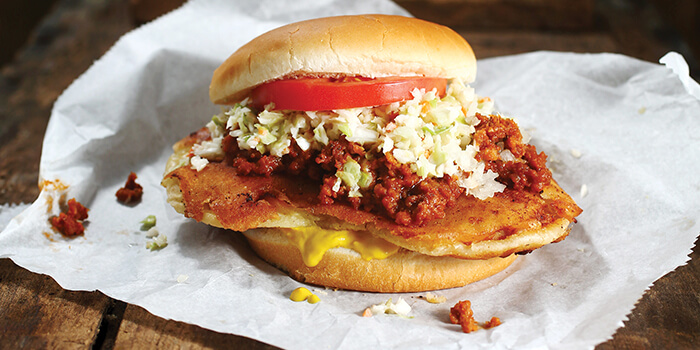 The Snappy Lunch diner was beloved by Andy Griffith, and after being mentioned on The Andy Griffith Show, it remains the only business in Mt. Airy to be mentioned on the show. The actor also mentioned the restaurant in his song, "Silhouettes," recorded in 1958.

Home of the "Famous Pork Chop Sandwich."  Breakfast items such as biscuits, eggs and breakfast meats can be ordered until 10:30 a.m.  Lunch sandwiches and chips can be ordered from 10 a.m. until closing time.  The pork chop sandwich is a must-try menu item, but Snappy Lunch also offers several other lunch favorites including BLT, bologna, cheeseburgers, hot dogs and steak sandwiches.

Sources used in this article: