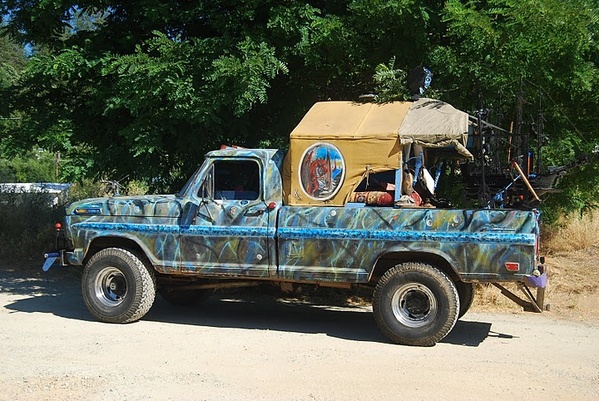 A truck spotted both in the 'downtown' parking lot and at the river that borders Yuba County. It seems to be have a pirate ship rigged in the back, and dragons and skulls covering the rest of it. Does anyone know the story? Part hippie, part isolationist-conservative. A little community in Nevada County that is very far removed from town. It's about a 20 minute drive from downtown Nevada City, but since you have to drive up and down the heavily forested, windy river-canyon road, it feels like quite a journey. When you get there, it consists of less than ten businesses scattered around the mountains, a bushel of dreadlocked hippies, a bunch of potfarms, a vineyard, and LOTS of empty, undeveloped wood, making North San Juan a really beautiful place, surrounded, as it is, by forested mountains and rivers. North San Juan is a great place to go explore for a day trip. There's all kinds of hidden spots, neat places to go, river access with good swimming holes and little stores and cafes. This area is spotted with little organic farms, beautiful little houses and the occasional run-down looking trailer that may or may not be a part-time meth lab. Farm, house OR trailer, because North San Juan and the Ridge are so sparsely populated, every residence seems to have acres of property that the people are free to plant, enjoy or neglect; if not legally, then simply by virtue of the fact that nothing occupies the next door lot. According to some residents, North San Juan can be a little dangerous if you venture onto private property in the fall, due to multiple potfarm operations, although there haven't been any injuries or deaths reported in recent history, so this might be a bit a historic tidbit OR an "urban" legend. Otherwise, North San Juan and the Ridge area have a very relaxed feel to them. North San Juan also borders the middle fork of the Yuba River (home of Mushroom Rock), which acts as the divider between Nevada and Yuba County.

North San Juan is an old Gold Rush town (like much of Nevada County), and was a community that flourished as a result of the hydraulic mining taking place next door at Malakoff Diggins State Historic Park in the 1850's. It was also included on the route of the first long distance telephone line. North San Juan was named by a veteran of the Mexican-American war who settled in the scenic little mining town in the 1850's and thought it looked like San Juan de Ulúa near Veracruz. 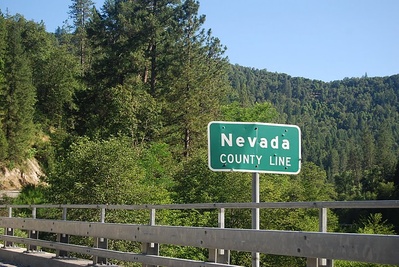 The Nevada County Marker as you cross from Yuba County into Nevada County. As you can see from the surroundings, North San Juan is a really beautiful place! The San Juan Ridge is a prominent landmark that extends about 24 miles between the south and middle forks of the Yuba River. North San Juan covers about 2.4 square miles and is sparsely populated, with a 2010 population of 269 people.

To get to North San Juan, just hop over onto Hwy 49 in Nevada City. The 49 corridor passes over the top of the south fork of the Yuba Riverthrough North San Juan, and intersects with other major roads that will take you out to the extended "Ridge" area. Staying on 49 will eventually take you out to the border of Nevada and Yuba County and eventually, into Camptonville and beyond that, into Downieville. The middle fork of the Yuba River acts as the north western border of Nevada County and it's meandering path contributes to the irregular shape of the county line. When crossing over into Yuba County, you will also cross a bridge over the Yuba river. This section of the river is just inside of the Tahoe National Forest, and is home to Mushroom Rock, a popular destination for swimmers, and one of the best jumping areas in Nevada County.

The San Juan Ridge is about 2,600 feet above sea level, which means it will get cold and snow in the winter, but it usually won't snow more than a foot or two. The environment is pretty similar to the environment of Nevada City.

Due to it's small population, there is lots of room to roam, and many places to discover and explore without running into throngs of people (if any people at all). Part of the San Juan Ridge is enshrined in the Tahoe National Forest, and, indeed, the entire Ridge is composed mostly of Coniferous Forest, with the occasional wood sprinkled here and there. When out driving the windy mountain roads, there are some fantastic views of distant mountains.

Other Notable areas and communities on the San Juan Ridge

Off of the the 49 Corridor/Extended Ridge Area