On February 24, 1956 U.S. Senator Harry F. Byrd, Sr. of Virginia declared a policy known as "Massive Resistance" against school desegregation. But legal precedent demanded action, for in May 1954 the Supreme Court of the United States ruled in the case Brown v. Board of Education that racially segregated schools must end in the United States. After three years of court battles and recalcitrance by Virginia governor Lindsay Almond Jr, 17 black students were admitted to Norfolk Virginia Schools on February 2, 1959. They are collectively known as The Norfolk 17. 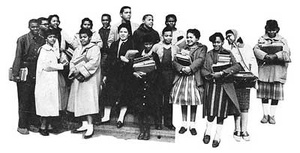 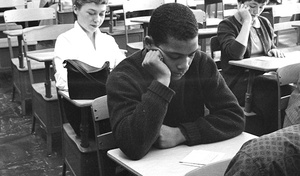 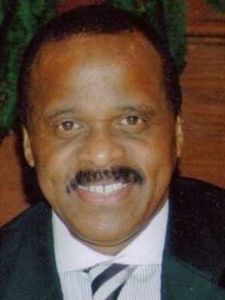 The Norfolk 17 were exceptional teens, who were heads and shoulders above their peers. They were put through a barrage of tests by white school officials, before being accepted to attend school. The tests that they were given, were not given to white students, and in fact, it is a practice that continues to the present day- in the work force, blacks are expected to be twice as good as the next white candidate, in order to keep their jobs, (for example- consider black quarterbacks in sports).
The Norfolk 17 continued their exceptional achievements in later life. Some earned doctorates, others wrote books, and all were successful citizens. 50 years later, they were recognized by the very city which had rejected them, Norfolk Virginia. But what is not usually discussed about the Norfolk 17, is that white students were also affected by the events. It happened when school officials decided to close the schools rather than allow blacks to enter them.

Here is a short Biography of one of the Norfolk 17:

"Norfolk 17 member Andrew Heidelberg was born on November 6, 1943 in Norfolk, Virginia to Lena and Colonal Heidelberg. After desegregation rulings by federal judges in 1957 and 1959 against a fight led by Governor J. Lindsay Almond, Heidelberg began his education at Norview High School, five years after the U.S. Supreme Court ruling Brown v. Board of Education. At the age of fourteen, Heidelberg joined sixteen other African Americans selected out of the 151 who had applied to attend all-white schools. Split between three junior high and three high schools, "The Norfolk 17" started Norfolk’s schools’ integration efforts in Virginia. In 1961 during his senior year, Heidelberg made the school football team and was the first African American to play varsity football at an all-white public school in Virginia and in the South. That same year, his team won the Eastern District Championship for the State of Virginia and brought together black and white families alike.
In 1967, Heidelberg entered the banking industry and worked at Industrial National Bank of Providence, Rhode Island. He became the bank’s first African American Branch Manager, Credit Officer, and Commercial Loan Officer before he left in 1976 to found Heidelberg, Clary & Associates, Inc. After the firm closed, Heidelberg worked at Barclays Bank of New York and Banco de Ponce-New York as a Vice President and Corporate Manager. In 2001, Heidelberg graduated from Norfolk State University with his B.S. degree in Interdisciplinary Studies. He went on to serve as Assistant Treasurer and Chief Deputy Treasurer for the City of Hampton in 2003. He returned to Norview High School in 2009 to commemorate the 50th anniversary of the end of “Massive Resistance” in Virginia.
Heidelberg was selected by Governor Mark Warner in 2005 to serve a two-year term as a member of the Brown v. Board of Education Scholarship Awards Committee. He was appointed to serve two additional consecutive two-year terms (through 2011) by Governor Tim Kaine. In 2006 he published his story in the book The Norfolk 17: A Personal Narrative on Desegregation in Norfolk, Virginia in 1958-1962. Heidelberg also finished writing a screenplay in 2009 based on the book The Colored Halfback scheduled for publication in 2010.Heidelberg passed away on July 6, 2015 at the age of 71, " (Source: "Andrew Heidelberg | The HistoryMakers." Andrew Heidelberg | The HistoryMakers. Accessed November 6, 2015.)

The Norfolk 17 face a hostile reception as schools reopen:  https://www.pilotonline.com/projects/massive-resistance/article_05745bcd-a24e-5d1d-9c5c-ce22313d963d.html