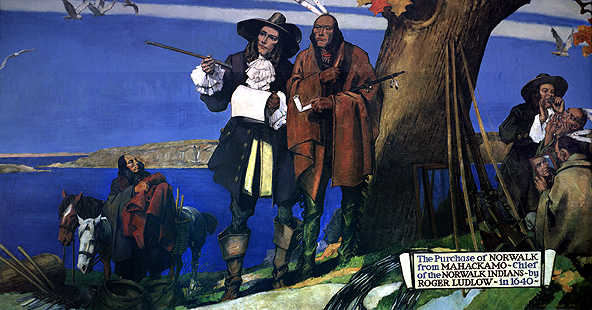 The History of Norwalk begins with the original inhabitants of the area. There is archaeological evidence that suggests substantial pre-contact inhabitancy of the area by human beings dating back as early as 5000 years ago.

The native people who first contacted European settlers at Norwalk were the Norwalke Indians, a small tribe of the Siwanoy. The first recorded contact was made in 1614 by Dutch navigator Adriaen Block. Block mentions his visit to the Norwalk Islands in the records of a fur trading expedition with Native Americans along the Connecticut coast.

The land for a Norwalk settlement was purchased from the chief of the Norwalke Indians, Mahackemo, in two separate transactions in 1640 and 1641 by Daniel Patrick and Roger Ludlow. Patrick purchased the areas west of the Norwalk River and east of the Five Mile River (present day South Norwalk, Rowayton, and West Norwalk) on April 20, 1640. Subsequently, Ludlow purchased areas east of the Norwalk River (present day East Norwalk and Saugatuck) on February 26, 1641 (Gregorian). The event is depicted in a WPA mural titled Purchase of Norwalk by Harry Townsend.   [Note: From what source(s) did this information originate?]

The first European settlers arrived from Hartford in 1649. Norwalk was incorporated on September 11, 1651, when the General Court of the Connecticut Colony decreed that “Norwaukee shall bee a townee”. They were:

The town of Norwalk was founded in 1651.