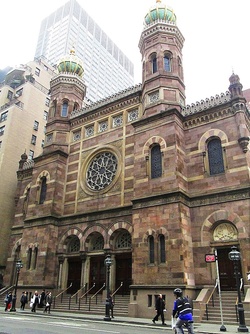 Located on the corner of 55th Street and Lexington Avenue in Midtown Manhattan, Central Synagogue, is home to one of the largest Reform Jewish congregations. Central Synagogue is a 149-year-old twin-towered architectural gem designed in the Moorish Revival Architecture style.

It has a rich history in New York City that dates back to the 1800s. Today’s congregation can trace their ancestry from two parent congregations, Shaar Hashomayim and Ahawath Chesed. Each founded on the Lower East Side of Manhattan by German-speaking immigrants. In 1860, Ahawath Chesed purchased a church located on the Lower East Side in New York, City.  As the congregation grew, the need to find more space also grew. In 1872, Congregation Ahawath Chesed moved North from its location on the Lower East Side to the corner lot on 55th Street and Lexington, Midtown Manhattan. In 1898, Congregation Shaar Hashomayim moved to Midtown and joined together with Ahawath Chesed. In 1917, they changed their name to Central Synagogue. Presently, Central Synagogue or Central as it is referred to by the nearly 2,500 families who call this synagogue home, is the oldest temple in continuous use  by one congregation in the state. Their historical archives consist of many historic documents, images, and original meeting minutes that all were hand-written in German. In 1966, Central Synagogue was named as a New York City Landmark and in 1975 it was named a National Historic Landmark. Built between 1870-1872, Congregation Ahawath Chesed entrusted trained German architect Henry Fernbach, who was known as New York's first prominent Jewish architect to build their new home. Fernbach was a Prussian Jew who was known for his synagogue designs, in the Moorish Revival style of architecture and his cast iron exteriors. Fernbach created a detailed and sophisticated interior whose designs were first drawn onto the walls to then be hand painted. The sanctuary, which was constructed to sit about 1,400 people, was surrounded by double-story stained glass windows in addition to gas-fired chandeliers that brightened the sanctuary. The structure stood out because of its unique and interesting architecture. Pulling up to this amazing structure you are greeted by three double doors that are separated by thin columns supporting the round Moorish arches of the synagogues main entrance. In addition, there are two side doors, and above the three double doors is a beautiful rose window and two domed towers that stand tall in the New York City skyline. The synagogue is based off of the Dohány Street Synagogue which is located in Budapest, Hungry. 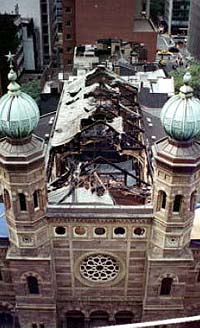 The roof after the fireIn 1946, the Synagogue hired architect Ely Jacques Kahn,  to do some renovations on the temple.  Kahn changed Fernbach’s Moorish revival style that decorated the inside of the sanctuary. He made the interior more modernized by changing the windows and lighting. In 1998, following a lengthy restoration, a fire ripped through the synagogue destroying the roof, floor, sanctuary and some support beams. The members of the congregation decided to restore the synagogue to its original 1872 interior design. While the stained glass windows, the exterior walls, and the original ark were saved in the fire, the interior was reconstructed to accommodate the new needs of the temple community by changing the interior to accommodate the many different styles of services they were providing.  Perhaps the most important detail of the interior was the stencil work that covers the walls. The current color combinations return to the spirit of the historic original scheme. This restoration was completed only two days before the deadly attack on the World Trade Center in 2001. By using the historic Moorish Revival Style its architect, Fernbach was able to give New York City, in 1872, a unique place of worship who’s exquisite details still differ greatly from most of the other religious structures in this area. 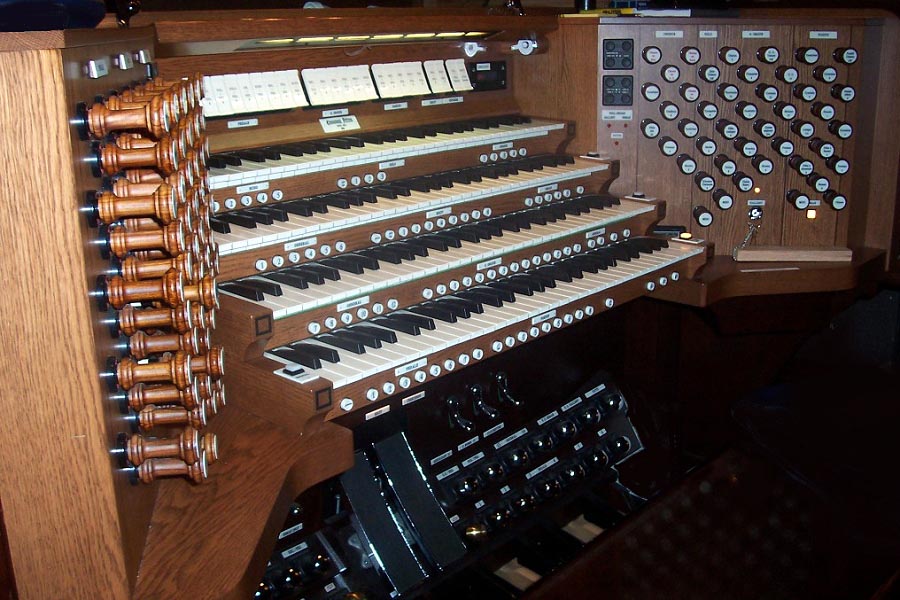 Currently, the sanctuary is home to The Gabe M. Wiener Memorial Organ. This organ replaced the 1937 Kilgen organ which was destroyed in the fire that damaged the synagogue in 1998 and the Kilgen organ replaced the original organ of 1880. Central gives back to the community by offering free monthly lunchtime organ concerts featuring musicians from around the world.

The bimah, or stage is the focal point of any sanctuary. It is a raised area that the clergy members and other guests sit on for the service. The chairs that are on the bimah are usually an important part of the decor and usually have a special meaning to the congregation. The original bimah chairs were made to be part of the design of Henry Fernbach’s Moorish Revival style. These chairs included carvings on its rail and a leaf pattern which joined the theme of the bimah’s cast-iron columns and the carvings on the ark column doors. In addition, the synagogue had beautiful carved bimah chairs that were believed to be from Congregation Shaar Hashomayim when they merged with Congregation Ahawath Chesed. These beautifully designed chairs each hold historical value to the synagogue and were updated in the 1970’s by Central Synagogues Sisterhood. Although there is only one Fenbach original chair in the synagogue, another one can be seen at the Metropolitan Museum of Art in New York.

In Jewish communities, a synagogue is an important gathering place for its Jewish population.  Central is not only a place to gather but aan inclusive and welcoming community and while the  Synagogue is part of the Union for Reform Judaism the congregation is made up of all faiths of the Jewish religion. Even though the synagogue is a membership-based community, and every paying member has a say in this synagogues well being, they still want to connect with anyone, regardless of their religious beliefs. They hold events, activities, and social gatherings which also brings them closer to their community.

In 2014, the Central Synagogue made history when they chose Rabbi Angela Warnick Buchdahl  as the first woman to lead the congregation. She is also the first Asian American to be established as a cantor and a rabbi in North America. Even if they are a virtual congregation, they are as committed to helping their communities as before the pandemic.

For those who practice the Jewish faith, and even for those who do not, this Synagogue is a wonderful place to visit.  The walls that house this Synagogue are full of wonderful history and its current history is just as groundbreaking.  Under normal circumstances, whether you are participating in one of the Synagogues many events or just want to learn about its rich New York City history, its doors are always open.

Congregational Service: 9:30 am, Saturdays (most weeks)

The Mishkan: 9:30 am, Select Saturdays

“About Us.” Central Synagogue, www.centralsynagogue.org/about_us.