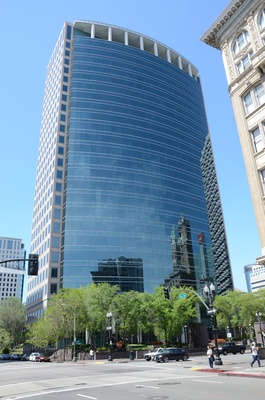 This 24-story building, located at 1111 Broadway and part of the City Center project, is the 4th-tallest building in Oakland. It was originally known as the APL Building in recognition of its original role as the headquarters of American President Lines shipping company. After APL moved out of the building (to that well-known port city, Phoenix), the building was renamed based on its address.

The Broadway Theatre which formerly occupied a portion of the site was demolished in 1972. Construction of the building began in the late 1980s, and was interrupted by the Loma Prieta earthquake. Local artist Anthony Holdsworth painted a picture called "After Earthquake" showing the partially constructed building and a construction crane behind the Key System Building. Construction was completed in 1990.

The area behind the building has a plaza with a waterfall. It's a privately-owned space open to the public.