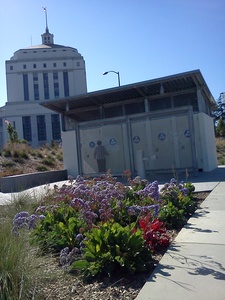 The 12th Street Public Restroom with the Alameda County Courthouse in the background. (photo by mk30)Sometimes we get nice things -- especially if we are willing to pay for them.

As construction of the Measure DD-funded 12th Street pedestrian bridge was nearing completion, a small structure arose behind the green fence siding. These days, we know that structure as the 12th Street Public Restroom.

A marvel of modern design, none of us can still quite believe that it's real. Functional, sleek design, ample toilet paper, and convenient location (could it be the only always-accessible public restroom on the Lake Merritt loop?), its only two drawbacks are 1) the lack of little things on the doors that indicate "occupied" or "vacant" 2) the lack of a high-power hand-dryer (there's only a normal-power useless hand dryer). May all the public restrooms of Oakland one day be as nice as the 12th Street Public Restroom, which was constructed as part of the Measure DD-funded 12th Street Reconstruction Project.1