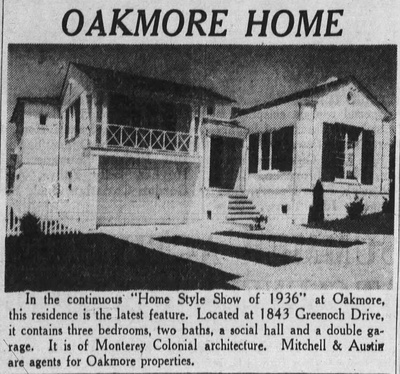 1843 Greenack Drive is a Monterey Colonial-style home on what is now Rosecrest Drive. It was featured in 1936 as part of the Oakmore Highlands development.

1935 directoryThe street name is spelled Greenoch in the photo caption, but Greenack in the 1935 directory. It was a very short street in line with Rosecrest Drive, and the label was left off of most maps of the time. It's not yet known year it was made part of Rosecrest Drive, nor what the official spelling was.

1940 directory 1By 1940, it had acquired the current address of 1809 Rosecrest, and it was the residence of Ben E. Lawrance,1 his wife Dorothy Richards (Lawrance) and their daughter Virginia Aubrey Lawrence (Lewis). Lawrance worked as a salesman and then manager for a meat packing company, and later for C. S. Hansen. The Lawrances lived there until at least 1969, when Ben was retired.