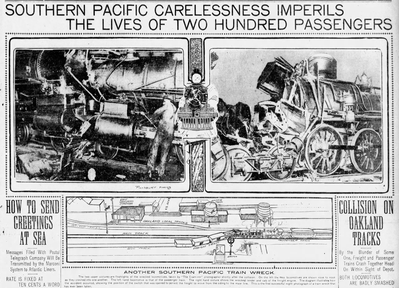 On December 23, 1902 at 4:45 PM, an eastbound freight train collided with a westbound passenger train near East Oakland (or Brooklyn) station at the foot of 13th Avenue. Fortunately the freight train had just started up from a side track, and the passenger train was slowing on the main track. Both engines were smashed, along with a freight car, but there was only one serious injury, to Maurice Shean, the engineer of the passenger train. People's nerves were a bit raw, because 26 people had died just days before in a train collision near Byron, CA.

Both were Southern Pacific trains. The passenger train was carrying more than 200 passengers and had come from Sacramento, via Stockton, Tracy, Livermore and Niles. It was due at East Oakland at 3:30 PM, but was running over an hour late (which as the newspapers pointed out, was not unusual). The heavy freight train had been sitting on a siding for some time. When it was ready, the conductor gave the signal and the engineer started the train forward. The freight had just started onto the main track when the engineer saw the approaching passenger train. He threw the train into reverse, put on the brakes and he and the fireman jumped. Maurice Shean saw the freight ahead and did likewise. The fireman of the passenger train, Thomas Gilmartin, tried to jump, but his clothing caught on some machinery. The trains crashed together, but because both trains were slowed, it ended up that Shean was the only one injured.

Shean had a serious scalp wound, a compound fracture of the right leg, and complained of back pains. The railroad surgeon, Dr. J.P. Dunn, gave him opiates and forbid visitors except his wife. 2 Shean was moved to the SP railroad hospital in San Francisco. After a week or so, doctors decided they had to amputate his foot. 3 Unfortunately, Shean didn't survive, and succumbed on January 13, 1903. The funeral was held at the family home, 1240 Adeline Street, followed by a requiem mass at the Church of the Immaculate Conception. Shean was buried in St. Mary's Cemetery. 4 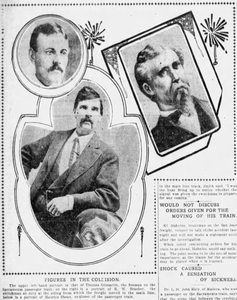 Hahnlein readily admitted it was his responsibility to check that the Sacramento train had passed 1st and Broadway before proceeding. He thought the train had passed, but because it was over an hour late, he was looking at the wrong record. Ironically, it was the third train wreck that Hahnlein had been involved with in the past month. He was in a wreck in Benecia on Thanksgiving in which 2 men were killed, and he had helped clear away the dead from the terrible crash near Byron. 5 A coroner's jury agreed, and the late Maurice Shean was cleared of any wrongdoing. Dixon was exonerated in any blame for the crash, but had committed a technical violation of the rules. SP fired both Hahnlein and Dixon. 6