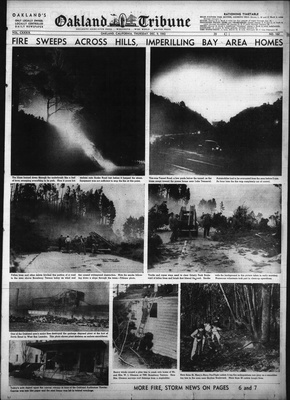 December 9, 1943 Oakland Tribune 1In December, 1943, there were winds up to 75 MPH and various fires in the hills. The largest fire started near Broadway Terrace and Skyline, which spread to 30 square miles. 1 [ that seems like a lot, even if the hills were more sparsely populated ]

The winds blew out hundreds of windows around Oakland. Fires in the Oakland hills and all around the bay spread rapidly because of the wind. Fishing boats along the coast were blown ashore and damaged or destroyed, and power lines knocked down all over. 1

A separate fire destroyed the garbage facility at the end of Davis Street. 1